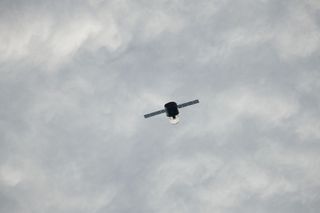 This view of SpaceX's first Dragon spacecraft to the International Space Station was captured by Expedition 31 astronauts during the capsule's first flyby on May 24, 2012.
(Image: © NASA)

The private space capsule Dragon is closing in on the International Space Station in preparation for its first rendezvous and docking there today (May 25).

The unmanned Dragon capsule, built by Space Exploration Technologies Corp. (SpaceX) is now about 820 feet (250 meters) away from the station, where it will pause for some demonstration tests before closing the rest of the distance.

"It's great to see," European Space Agency astronaut Andrei Kuipers said this morning when the vehicle came into sight. "The solar panels are nicely lit, it's a good feeling."

At 7:59 a.m. EDT (1159 GMT), astronauts inside the space station will grab onto the craft with the outpost's robotic arm, and a few hours later, they are due to attach Dragon to an open docking port, making it the first spacecraft built by a company — and not a national space program — ever to berth at the station.

A series of orbital tests Thursday (May 24), including a practice flyby of the space station by Dragon, cleared the way for the capsule to attempt the groundbreaking berthing today.

If the spacecraft passes a few more checkouts today, Dragon will eventually be attached to the lab's Earth-facing Harmony node.

"Sort of like a cowboy ropin’ a steer we fly in the robotic arm and lasso the vehicle and then we bring it up to one of the docking ports on station," NASA astronaut Don Pettit, who will control the arm for tomorrow's maneuver, said in a preflight NASA interview. [SpaceX's Historic Flight to Space Station (Photos)]

The rendezvous and docking plan was approved by NASA Thursday after Dragon completed a near-flawless series of tests, including checkout of its navigation and communications systems, during a flyby of the station.

"Certainly this is a demonstration flight, a test flight, and to get through the first piece of it, obviously makes you feel positive, but in terms of the activity tomorrow there's still a lot of new things that the teams need to perform and the vehicle needs to perform," NASA flight director Holly Ridings said during a briefing Thursday.

There are further checks in place today to make sure the untested Dragon is cleared to safely approach the $100 billion International Space Station, a collaboration between the United States, Russia, Europe, Canada and Japan. The rendezvous activities have been punctuated with a series of "go-no go" queries in Mission Control in Houston, starting when Dragon is 1.5 miles (2.5 kilometers) from the station and again at various points closer in.

The capsule is a 14.4 foot-tall (4.4 meter) and 12 foot-wide (3.7 m) gumdrop shape, packed with student-designed science experiments as well as crew food rations and clothing for the six spaceflyers living on the orbiting laboratory.

Dragon launched atop a SpaceX Falcon 9 rocket from Cape Canaveral, Fla. on Tuesday (May 22). It was the second-ever flight to orbit for the new capsule.

The vehicle is due to spend just under a week docked at the space station being unpacked. On May 31, the capsule will be loaded with its return cargo, completed science experiments and equipment no longer needed on the station, and sent back to Earth. The spacecraft is equipped with a heat shield to survive the temperatures of re-entry; Dragon is intended to be recovered by ship crews after it splashes down in the Pacific Ocean.

Dragon is one of two commercial vehicles being nurtured by NASA to replace the cargo-carrying duties of the retired space shuttles (the other spacecraft is the Cygnus built by Orbital Sciences Corp., of Dulles, Va.). This flight is a test mission sponsored by the agency's COTS program (Commercial Orbital Transportation Services).

If the current mission goes smoothly, SpaceX will be cleared to begin flying delivery missions to the space station starting this fall. The company is contracted for at least 12 of these flights for a total of $1.6 billion.