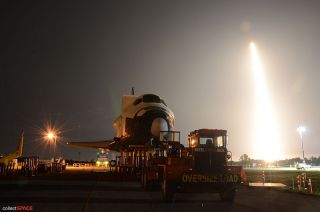 CAPE CANAVERAL, Fla. — A private space capsule called Dragon soared into the predawn sky Tuesday, riding a pillar of flame like its beastly namesake on a history-making trip to the International Space Station.

The unmanned capsule, built by billionaire entrepreneur Elon Musk's Space Exploration Technologies Corp. (SpaceX), is the first non-governmental spacecraft to launch to the space station, ushering in a new era of partnership between the public and private spaceflight programs.

"I think this is an example of American entrepreneurship at its best," said Alan Lindenmoyer, manager of NASA's commercial crew and cargo program, in a briefing before the launch. About 100 VIP guests were on hand to witness the launch, NASA officials said.

The Hawthorne, Calif.-based SpaceX launched its Dragon capsule at 3:44 a.m. EDT (0744 GMT) today (May 22) from a pad here at the Cape Canaveral Air Force Station. It blasted off atop SpaceX's Falcon 9 rocket, a 157-foot (48-meter) booster powered by nine Merlin rocket engines. The space station was flying 249 miles above the North Atlantic Ocean as the rocket lifted off, NASA officials said. [Launch Photos: SpaceX's Dragon Blasts Off for Space Station]

The Falcon 9 rocket's second stage is also reportedly carrying ashes from 308 people, including actor James Doohan, who played Scotty on the 1960s television series "Star Trek," and Mercury program astronaut Gordon Cooper. The ashes were flown under a deal with the "memorial spaceflight" company Celestis, according to ABC News and Reuters.

The SpaceX launch vehicle is named after the Millennium Falcon of "Star Wars," while the capsule got its moniker from the Peter, Paul and Mary song, "Puff, the Magic Dragon."

Today marked only the second-ever launch of a Dragon capsule, and the third flight for the Falcon 9 rocket. It was the second attempt to launch the space station-bound test flight after a launch try Saturday was thwarted by a faulty rocket engine valve. Repairs were made over the weekend, and the SpaceX team counted down smoothly to the liftoff this morning.

"One thing that they are very good at is being able to work through launch abort and treat those problems and be prepared to go again in a very short time," Mike Horkachuck, NASA project executive for SpaceX, said Monday (May 21).

Today's launch is the last planned test flight for SpaceX under NASA's Commercial Orbital Transportation Services (COTS) program intended to develop a private-sector replacement for the cargo-delivery services of the retired space shuttles. SpaceX has a $1.6 billion contract to fly at least 12 unmanned missions to the space station through 2015.

Musk founded SpaceX in 2002 with the goal of boosting commercial access to space and, ultimately, aiming for deep-space exploration, including missions to Mars. The success of today's launch was never certain or assured, Musk had repeatedly said.

Today, the mission's uncertainty eased up a bit, he said.

"Falcon flew perfectly!!" Musk wrote in a Twitter post from Falcon 9's mission control room in Hawthorne. "Dragon in orbit, comm locked and solar arrays active!! Feels like a giant weight just came off my back."

The spacecraft is due to spend its first day on orbit catching up with the 240-mile high (390 km) space station, where it will rendezvous Thursday (May 24) and perform a fly-by to within 1.5 miles (2.5 kilometers) to check its navigation systems. [Quiz: How Well Do You Know SpaceX's Dragon?]

On Friday (May 25), the capsule is slated to perform a series of maneuvers to approach the station, with crewmembers onboard the outpost issuing commands to Dragon. If the spacecraft passes a set of "go-no go" checks at Mission Control in Houston, NASA will approve the vehicle to approach the International Space Station. From inside, astronauts Don Pettit and Andre Kuipers will use the lab's robotic arm to grab Dragon and berth it to the station's Harmony node.

The hatches between the two spacecraft are due to be opened early Saturday (May 26), so the crew can enter Dragon and unpack its deliveries.

Dragon is due to spend about a week attached to the outpost. On May 31, the capsule will be packed with completed science experiments and other equipment, unberthed, and sent back toward Earth. The vehicle is equipped with a heat shield to withstand the fires of re-entry, and is due to splash down and be recovered by ship in the Pacific Ocean.

Dragon is an unmanned version of a capsule ultimately intended to carry people as well.

Another company, Orbital Sciences Corp. of Dulles, Va., also has a NASA contract to deliver cargo to the space station, and plans to launch its first test flight later this year.

The program is part of a larger effort by NASA to outsource low-Earth orbit transportation to the private sector, allowing the space agency to begin work on a new spacecraft and heavy-lift rocket to visit asteroids, the moon and Mars.

The plan has received criticism from some lawmakers and members of the public, who worry that commercial vehicles aren't as safe or reliable as NASA's in-house built spacecraft.

"It's really easy to criticize, and it's very difficult to solve a problem and actually do something," said SpaceX president Gwynne Shotwell. "So I tend to focus on the business and getting our jobs done and not focus on those that want to criticize."

NASA officials and leaders of the commercial space sector say the time is right for space to transition from an exclusively government regime to an arena open to private companies.