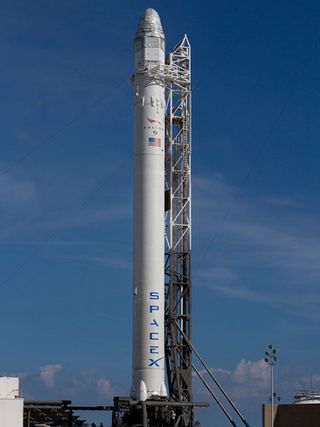 CAPE CANAVERAL, Fla. — A private spacecraft stands ready to launch on a historic first visit to the International Space Station tomorrow (May 19).

The unmanned Dragon space capsule, built by commercial firm SpaceX, is slated to lift off atop the company's Falcon 9 rocket early Saturday from here at the Cape Canaveral Air Force Station. The spacecraft has an instantaneous launch window at 4:55 a.m. EDT (0855 GMT), with a 70 percent chance of good weather predicted (the main risk of a delay is posed by the possibility of cumulus clouds).

If all goes well, Dragon will fly by the space station on Monday (May 21) and rendezvous and berth at the outpost the day after, becoming the first non-governmental vehicle to do so. The mission is the final test flight planned for Dragon, which has been developed under NASA's COTS (Commercial Orbital Transportation Services) program aimed at nurturing private spacecraft to supply the International Space Station.

The mission is a critical test for NASA's plan to outsource transportation to low-Earth orbit to the commercial sector, allowing the agency to begin work on a new heavy-lift rocket for deep space. Some in Congress and elsewhere have been critical of the scheme, arguing that private vehicles are untested and less reliable than NASA's in-house built spacecraft. [Photos: SpaceX Poised for Historic Launch]

If Saturday's launch is successful, it could help sway the naysayers, NASA administrator Charles Bolden said.

SpaceX (officially Space Exploration Technologies Corp. of Hawthorne, Calif.) has designed Dragon to fly robotically at first, though the company has designs to man-rate the capsule. Eventually, Dragon is planned to be able to carry up to seven crewmembers to orbit, and could be used to transport astronauts as well as cargo to the space station.

For this test flight, Dragon is loaded with 1,014 pounds (460 kilograms) of cargo for the orbiting laboratory, including 674 pounds (306 kg) of food, clothing and supplies for the station's six-man crew. It will also deliver scientific equipment and electronic hardware, including a laptop.

If the capsule's on-orbit checkouts go smoothly, then on Tuesday (May 22), NASA astronaut Don Pettit and European Space Agency flyer Andre Kuipers use the space station's 57.7-foot (17.6-meter) robotic arm to reach out and grab Dragon and berth it to the station's Harmony node.

The vehicle is scheduled to stay at the outpost for about two weeks. Then, it will be unberthed and will head back to Earth where it is planned to re-enter the atmosphere and land in the Pacific Ocean.

In contrast to the other unmanned vehicles that ferry cargo to the space station, Dragon is equipped with a heat shield to survive re-entry and be recovered after landing. Thus, before it departs the station, astronauts plan to load it full of science experiments ready for analysis on the ground, as well as used hardware to be returned to NASA.