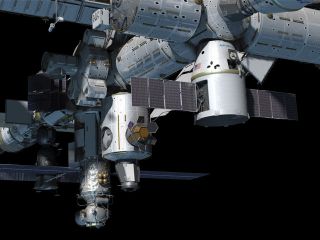 The first private spacecraft ever to launch toward the International Space Station will be carrying a host of student science experiments when it blasts off Saturday (May 19), including projects looking at spiders in space and how microgravity affects wine.

SpaceX's robotic Dragon capsule is slated to lift off early Saturday from Florida's Cape Canaveral Air Force Station. The flight is a demonstration mission, to see if Dragon and SpaceX's Falcon 9 rocket are ready to begin a series of 12 contracted supply runs to the orbiting lab for NASA.

In addition to food and various other supplies, Dragon is transporting 15 student experiments on its maiden flight to the space station, as part of an effort called the Student Spaceflight Experiments Program.

The experiments, designed by students ranging in age from fifth-graders to college sophomores, are a diverse bunch covering a variety of topics. [Photos: SpaceX Poised for Historic Dragon Launch]

One of them — devised by 9th and 10th graders from Chaminade College Prep in West Hills, Calif. — will investigate how microgravity influences the fermentation process that winemakers and brewers rely on. The experiment will launch grape juice and yeast into space, with the students hoping to determine if the speed of fermentation in space differs from that observed on Earth.

Another project, designed by fifth graders from the Quebec Heights school in Cincinnati, is lofting spider eggs to the station to see if arachnids develop differently in orbit than they do on Earth. A group from OA-BCIG High School in Ida County, Iowa, is performing a similar experiment, but with fish eggs instead of spiders.

Other experiments look at how microgravity affects reproduction and antibiotic resistance in disease-causing bacteria, and whether the microbes' DNA will get more degraded in orbit.

Also onboard Dragon are a study looking at microgravity's impacts on the medicines used to treat osteoporosis, as well as an experiment investigating how well cactus mucilage — a thick, gooey substance — can clean and filter water in space.

The 15 experiments were chosen from a pool of 779 proposals. They'll stay on the space station until July 1, when they return to Earth aboard a Russian Soyuz spacecraft along with three astronauts — NASA's Don Pettit, Dutchman Andre Kuipers and Russian cosmonaut Oleg Kononenko.

The Student Spaceflight Experiments Program (SSEP) was initiated in 2010 by the National Center for Earth and Space Science Education (NCESSE) and the company NanoRacks LLC, which offers small research spaces on the station. The aim is to get students more interested and involved in science, technology, engineering and math — the so-called STEM subjects.

“SSEP is designed to empower the student as scientist, and within the real-world context of science," said Jeff Goldstein, creator of SSEP and NCESSE Center Director, in a statement. "SSEP is about introducing real science to our children, and if you give them a chance to be scientists, stand back and be amazed."

Two previous rounds of student experiments have flown to the station via SSEP, traveling on the final missions of the space shuttles Endeavour and Atlantis in 2011, respectively.