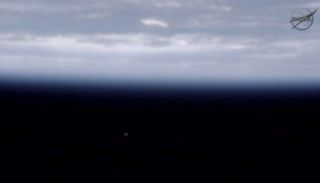 The private space capsule Dragon is visible as a small dot against the blackness of space in this view from International Space Station as the capsule flew by May 24.
(Image: © NASA TV)

A private spaceship on its first trip to the International Space Station made a flyby of the orbiting laboratory early Thursday (May 24), zipping just below the outpot in an unprecedented space first.

The unmanned vehicle, called Dragon, is built by Space Exploration Technologies Corp. (SpaceX), and is the first commercial spacecraft ever launched toward the space station. During the rendezvous, the spacecraft approached within 1.6 miles (2.5 km) of the outpost. Dragon launched to orbit  from Cape Canaveral, Fla., early Tuesday (May 22) atop a SpaceX Falcon 9 rocket and is due to arrive at the station on Friday (May 25).

Today was a final testing day for the capsule before it can be cleared to attempt its first docking. The capsule performed a near flyby of the space station just as designed, without any mishap.

"Today is a really great day," NASA flight director Holly Ridings said during a briefing after the flyby. "It's been very, very successful up to this point."

Crewmembers inside the orbiting lab have been monitoring the vehicle's activities.

"We all look forward to it," space station Expedition 31 flight engineer Andre Kuipers of the European Space Agency said this morning. "We will dedicate today to Dragon." [SpaceX's Historic Dragon Flight to Space Station]

The capsule successfully made its first burn to approach the space station at 3:58 a.m. EDT (0758 GMT), and followed with another engine firing at 4:43 a.m. EDT (0843 GMT) that took Dragon to a position 1.6 miles (2.5 km) below and 25 miles (40 km) behind the International Space Station, officially beginning its flyby. At around 7:25 a.m. EDT (1125 GMT), Dragon made its closest approach, passing through the imaginary line called the R-bar connecting the station and Earth.

From this spot, cameras on the outpost searched for sightings of the approaching capsule.

"Dragon may or may not be visible," NASA commentator Josh Byerly said. "Dragon should be a small dot on the horizon."

Shortly before 7 a.m. EDT (1100 GMT), station astronauts sent instructions to Dragon to turn on a strobe light as a test to make sure the craft can respond to commands sent by the astronauts. Though the light was invisible to the crew, the spacecraft's systems indicated that the command was received and responded to.

"It's too far out and brightly illuminated to see the strobe light," Kuipers said.

During today's flyby, Dragon tested its navigation and communications instruments, including a system called Relative GPS that uses the distance between the station and the capsule to determine Dragon's position in space. The vehicle will also tried out its "COTS Ultra-high frequency Communication Unit" to send signals to the space station.

As Dragon approached the station, the spacecraft was visible as a small bright dot in the distance.

"Whatever views we get today will definitely pale in comparison to how things are going to look tomorrow," Byerly said.

At 7:57 a.m. EDT (1157 GMT), Dragon fired its thrusters to depart the vicinity of the International Space Station, wrapping up its work for the day.

The tests performed during this day were orignally meant to be carried out on a dedicated mission called COTS 2, or C2, but SpaceX petitioned NASA to combine that mission with Dragon's first docking flight, and the request was granted.

"Achieving the original C2 mission objectives today was a big confidence boost," Dragon Mission Director John Couluris said from SpaceX headquarters in Hawthore, Calif. "It's exciting to be an American and part of putting an American spacecraft into orbit and we're very proud."

Based on the outcome of today's tests, NASA has given the go-ahead to allow the capsule to berth at the space station tomorrow. To do this, Dragon will approach near enough so that NASA astronaut Don Pettit, assisted by Kuipers, can grab onto the vehicle with the space station's robotic arm and maneuver it to attach to the station's Harmony node.

This mission is a test flight under NASA's COTS program (Commercial Orbital Transportation Services), which has helped fund the development of private vehicles to deliver cargo to low-Earth orbit in the wake of the space shuttles' retirement. SpaceX is one of two companies (the other is Orbital Sciences Corp. of Dulles, Va.) with contracts to fly delivery missions to the space station once their test flights are complete.

This flight is the second-ever flight for Dragon, and a defining moment for the burgeoning field of commercial spaceflight. SpaceX, based in Hawthorne, Calif., was founded by billionaire entrepreneur Elon Musk, who also co-founded the online payment service PayPal.

Musk, who has been posting Dragon mission updates on Twitter, said he got an unexpected call of support on Wednesday.

"The President just called to say congrats. Caller ID was blocked, so at first I thought it was a telemarketer :)" Musk wrote.

Dragon, at 14.4 feet tall (4.4 meters) and 12 feet wide (3.7 m), is packed full of food and clothing for the station crew, as well as supplies such as batteries and a laptop, and student-designed science experiments.

Dragon is due to spend just under a week berthed at the space station. On Thursday (May 31), the vehicle will be packed with completed science experiments and equipment ready to send back to Earth. The capsule is equipped with a heat shield to withstand its fiery re-entry through Earth's atmosphere, and is due to be recovered by a team of ships in the Pacific Ocean.