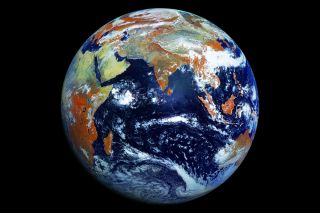 An image of the Earth taken by the Russian weather satellite Elektro-L No.1.
(Image: © NTsOMZ)

Think of it as an amped up version of the iconic "Blue Marble" image. A new photo of Earth from space highlights the striking beauty and intensely rich colors of our home planet.

The photo was taken by a Russian weather satellite, called Elektro-L No.1, which flies in a geostationary orbit more than 22,000 miles (35,700 kilometers) above the Earth's equator.

The image was posted by James Drake on the Planet Earth website. Drake obtained the photo from the Russian Federal Space Agency's Research Center for Earth Operative Monitoring, which manages the Elektro-L No. 1 spacecraft, after he expressed interest in animating and publishing them.

"In total I have an archive of 1,200 high-resolution images," Drake, who also maintains a blog called Infinity Imagined, told OurAmazingPlanet in an email.

Elektro-L No. 1 scans the Earth in visible and infrared wavelengths, observing natural phenomena and processes on the surface of the planet, according to officials at the Russian Federal Space Agency's Research Center for Earth Operative Monitoring. By combining different wavelengths of light, the planet's lush features and dramatic colors are emphasized. [Image Gallery: Earth as Art]

"When I see these images, I perceive the planet we live on as incredibly beautiful, interconnected and alive," Drake said. "They show the Earth for what it is, a spinning orb of metal and rock with a thin surface layer of unimaginable complexity. The fluid water and air that cover our planet are filled with intricate sel-replicating fractal patterns called life. What is happening on this planet is absolutely extraordinary!"

The portrait is also a powerful reminder of how humanity is connected to the cosmos.

"Just think about it, the atoms in your body and everything on Earth were formed in the hearts of supergiant stars, cast out in gigantic supernovae explosions, and condensed down into a small sphere orbiting a star," Drake said. "To see the Earth when knowing that is to discover yourself as a cell of a much greater being. You are an integral component of a planetary consciousness that is travelling through a vast and beautiful cosmos."

Elektro-L No. 1 was launched into orbit on Jan. 20, 2011, and is part of the Russian Federal Space Agency's new fleet of meteorological satellites.

Savvy observers may recognize some similarities between Elektro-L's photo and NASA's famous "Blue Marble" shot of Earth, which was recreated recently by NASA's newest Earth-watching satellite, Suomi NPP, which was launched on Oct. 28, 2011.

Suomi NPP's stunning portrait was compiled from images taken on multiple passes of the planet on Jan. 4, 2012.

These images are in good company with other remarkable shots of Earth, including a celebrated view taken by the crew of Apollo 17 in 1972, and photos taken by the workhorse Voyager 1 and 2 probes.