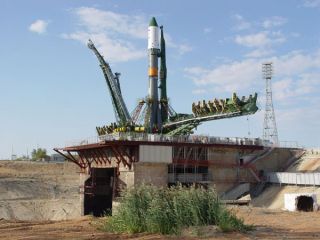 An unmannedspaceship crammed with food, water and other equipment is chasing down theInternational Space Station (ISS) on a resupply mission for the two astronautsliving onboard.

ISSExpedition 11 commander Sergei Krikalev and flight engineer John Phillips, who havelived aboard the space station since April, are eagerly awaiting the Sept. 10arrival of Progress 19. The spacecraft is set to dock at the aft end of thestation's Zvezda module at about 10:50 a.m. EDT (1450 GMT) Saturday and deliverabout 2.5 tons of new tools, spare parts and supplies.

Progress 19will replace an older cargo ship, Progress 18, which undockedfrom the ISS Wednesday and burned up - for the most part - in the Earth'satmosphere, with some larger sections crashing into the Pacific Ocean. Beforecasting off the expendable supply ship, Krikalev and Phillips packed it full ofwaste, trash and other unneeded items.

Beforelaunch, the spacecraft was fitted with 14 extra tanks to carry additionaloxygen and air supplies, which totaled about 242 pounds (109 kilograms) atliftoff, NASA officials said, adding that the spacecraft is also delivering 16 newsolid fuel oxygen generators (SFOGs), or "candles," which serve as an auxiliaryoxygen supply.

One vitalpiece of hardware aboard Progress 19 is a new liquid unit for the space station'sRussian-built Elektron device, which serves as the primary oxygen generator forthe orbital platform. The station's Elektron failedearlier this year after numerous repair efforts, forcing ISS astronauts to relyon reserve oxygen supplies in storage tanks and the SFOG candles.

The newliquid unit will hopefully allow Krikalev and Phillips to repair the generator,NASA officials said.

"That's whythey think it has failed," said NASA spokesperson Kylie Clem of the Elektronliquid unit. "So they've manufactured a few replacement units and soon after[Progress 19] arrives, the crew will replace it."

Krikalevand Phillips are in the homestretch of their six-month mission aboard the spacestation. The two astronauts will return to Earth on Oct. 10 after greetingtheir replacements, Expedition 12commander Bill McArthur of NASA and flight engineer Valery Tokarev of theRussian Federal Space Agency, on Oct. 3. Space tourist and scientist Greg Olsenwill ride up to the ISS with the Expedition 12 crew and return to Earth withKrikalev and Phillips.