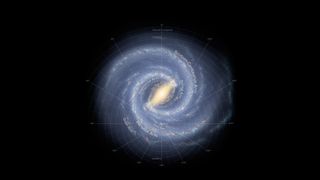 The Milky Way Galaxy is organized into spiral arms of giant stars that illuminate interstellar gas and dust. The sun is in a finger called the Orion Spur.
(Image: © NASA/Adler/U. Chicago/Wesleyan/JPL-Caltech )

From Earth at certain times of year, the Milky Way is visible overhead in the night sky from dark locations (you can’t see the Milky Way from under bright city lights). It looks like a giant swath of milky haze in the sky, which is where it gets the name.

We’re in the Milky Way Galaxy, on an outer arm, and what we see in the sky is our view toward the center of the Milky Way. If you could fly up into space and get above our galaxy and look down, you’d see a giant spiral, kind of like a pinwheel.