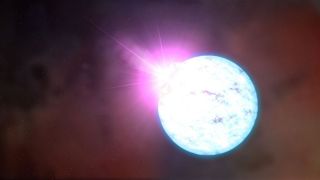 Three times in the last 40 years, giant gamma-ray flares have bombarded our corner of space. These giant flares aren't dangerous, and last just about one-tenth of a second. But they're wildly out of proportion to the usual gamma-ray beams bouncing around the universe. Since the first of the three flares was detected on March 5, 1979, astronomers have narrowed down the source of these unusual events: tiny magnetars, lashing out with enormous energy after some unknown cataclysmic event. And now astrophysicists have a new theory as to what those cataclysmic events are.

Magnetars are a type of neutron star — superdense objects that can outweigh our sun, but are roughly the size of Staten Island. All neutron stars have intense magnetic fields, but, as Live Science has previously reported, some are magnetic outliers — wrapped in magnetic field lines powerful enough to distort their behavior. In a new paper, released as a draft online Aug. 2 in the preprint journal arXiv, a team of Spanish astronomers argue that instabilities in magnetic fields could briefly crack a magnetar open — causing it to bare the intense energies in its guts. (The study has not yet been peer-reviewed.)

Unstable fields quickly right themselves, the researchers wrote, slamming around until they find a new, stable configuration. That process, they found, releases 30% of the total magnetic field energy across the powerful little star's rigid crust — in the form of waves of magnetic energy tall enough to span from the south shore of Long Island to Connecticut. That energy induces powerful mechanical stress on a magnetar's hard, half-mile-thick (1 kilometer) crust.

"Our results show that for typical magnetar field strengths...the instability is likely to break a large fraction of the crust down to the inner crust," the researchers wrote. "For the largest magnetic fields the stresses induced in the crust are sufficient to shatter the entire crust."

And all three magnetars that have generated giant flares, they pointed out, have unusually large magnetic fields.

Once a magnetar crust cracks open, they wrote, a giant fireball would blast out at "ultrarelatavistic" speed, or a significant fraction of the speed of light. The whole process would take less than a second and from Earth, what we’d see is one of those giant gamma-ray flares astronomers have been detecting since 1979.