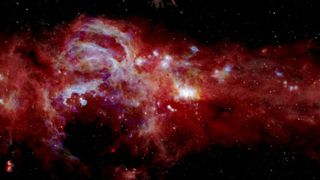 A composite image shows infrared light from swirls of gas and dust at the center of the Milky Way.
(Image: © NASA/SOFIZ/JPL-Caltech/Herschel)

A gorgeous, incredibly detailed new image of the Milky Way's center could help explain one of the enduring mysteries of our galaxy — why its heart is missing stars.

The high-resolution image, produced using a combination of infrared data from four different sources, shows i how clouds of gas and dust swirl and interact. New features emerged in the image that, according to a statement from NASA, could help explain the strange pattern in star formation.

"The Milky Way's central regions have significantly more of the dense gas and dust that are the building blocks for new stars compared to other parts of the galaxy. Yet, there are 10 times fewer massive stars born here than expected," representatives of the agency wrote in the statement.

In other words, there's a lot of raw material for stars swirling around the middle of our galaxy, but it isn't turning into stars the way existing models would predict. Even more strangely, the stars that do form in the region tend to clump together, forming structures like the Quintuplet Cluster and Arches Cluster, according to NASA

This new image revealed features of those clusters — warm regions of hot gas — that researchers think could explain this mysterious phenomenon, according to NASA. And solving that mystery could sharpen our picture of the whole universe.

"Understanding how massive star birth happens at the center of our own galaxy gives us information that can help us learn about other, more distant galaxies," said Matthew Hankins, a postdoctoral scholar at the California Institute of Technology in Pasadena and leader of the project that produced this image.

To create the super-sharp image, the researchers used light in the infrared — spectrum, which can reveal details that would otherwise be obscured by intervening clouds of matter and stars, according to NASA. The primary data source was the Faint Object Infrared Camera (FORCAST) aboard the Stratospheric Observatory for Infrared Astronomy (SOFIA) — a modified Boeing 747 that NASA and the German Aerospace Center jointly operate to capture detailed images with no atmospheric interference, and without travelling into orbit.

Two frequencies that FORCAST observed show up as blue and green in the image. Another wavelength captured by the European Space Agency's Herschel Space Observatory is shown in red. And a final, short wavelength captured using NASA's Spitzer Space Telescope (reaching the end of its lifetime this month, on Jan. 30) is shown in white.

Together, the wavelengths paint a picture of a region of space 600 light-years across, according to NASA. They also reveal what may be clouds of material infalling toward the wide ring around our galaxy's central black hole.

The next stage for the observations, NASA said, is to fill in some of the gaps in the image, dark regions where not enough data could be gathered using the available equipment. When the James Webb Space Telescope finally launches in TKTKTK year, it might see features that SOFIA could not, according to NASA.