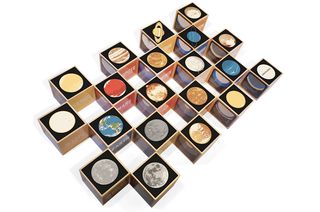 A new collaboration with The Planetary Society is making space exploration the stuff of child's play.

"We hesitate to call these toy blocks because they're designed for more than just kids," writes Chop Shop on its crowdfunding campaign page on the Kickstarter website. "While toddlers will be drawn in by the art of each world, an older child will understand the relative sizes to one another and the vast distances between these worlds."

"But we hope the new data considerations on each block will have curious people of all ages contemplating our celestial neighborhood," writes Chop Shop.

The Planetary Blocks set includes cubes for the sun and the planets are they are defined today, Mercury, Venus, Earth, Mars, Jupiter, Saturn, Neptune and Uranus.

"Yes we love Pluto, too, but why do we put all the focus on these particular eight bodies simply because they orbit the sun?" asks Chop Shop.

Each of the 1.75-inch (4.4-centimeter) blocks displays on its six sides the name of its world, an illustrated representation of the body, the orbit that it follows, a cross-section view of the body's core, its scale relative to Earth and the flagship and major missions that have revealed the world's details.

"This project would not be possible without the dedication of the men and women who build the machines that can take us to new worlds," states Chop Shop.

The block for Earth's moon, for example, includes the Soviet Luna missions from 1958 to 1976, the U.S. Lunar Orbiter missions between 1966 and 1967, NASA's Apollo astronaut missions from 1968 through 1972 and China's Chang'e missions that began in 2007 and continues through the present.

"Some places like Earth, Mars and the moon have had many missions, so we curated the selections based on each mission's scientific or historical importance. Others, such as Uranus, Neptune and Pluto have had few missions and, in those cases, our list goes only one mission deep," notes Chop Shop.

To ensure that the information on each block is accurate, Chop Shop consulted with The Planetary Society. a non-profit organization co-founded by the late Carl Sagan, which has the mission to empower the world's citizens to advance space science and exploration. The Planetary Society's vision is to "know the cosmos and our place within it."

Chop Shop worked with Emily Lakdawalla, senior editor and planetary evangelist for The Planetary Society, to refine the information represented on the Planetary Blocks.

"Our own Planetary Evangelist, Emily Lakdawalla, partnered with Thomas [Romer, founder of Chop Shop], researching the facts and writing the text to invite comparison and contrast among the varied worlds of our solar system. Who knew that accuracy could be so much fun?" said Bill Nye, "Science Guy" and CEO of the Planetary Society, in an email to supporters.

Chop Shop launched its Planetary Blocks Kickstarter campaign on April 23, seeking $15,000. Less than a week later and with more than a month to go before the project closes on June 5, the campaign has surpassed its goal, raising nearly $35,000 from more than 400 backers.

The full set of Planetary Blocks is offered for a pledge of $75 or more. In addition to the blocks themselves, Chop Shop is also offering perks of space exploration-themed, prints, posters and a solar system-themed The Planetary Society scarf.

This is Chop Shop's first product made from wood, so they acknowledge they do not know how long production may require. They are targeting September, though, for delivery of the Planetary Blocks.

For more, see Planetary Blocks: Our Solar System on Kickstarter at: http://kck.st/2VplE5q

Click through to collectSPACE to watch a video about Chop Shop’s Planetary Blocks.