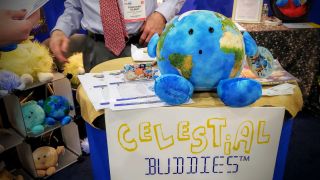 The new Celestial Buddies plush toy – Our Precious Planet – is on display at the New York Toy Fair. The company's older model, Earth, sits on a shelf to the left, along with other plush toy planets.
(Image: © Kasandra Brabaw/Space.com)

NEW YORK — Toymaker Celestial Buddies, which reimagines planets as stuffed toys,  witnessed the launch into space of its adorable, anthropomorphized Earth plush toy as the "zero-g indicator" on SpaceX's Crew Dragon this weekend. The toy is now completely sold out of Earths, but if you're looking for a "zero-g indicator" of your own, don't be discouraged. The company also offers a new and improved version of its now-famous Earth plushy, and it's still in stock (for now!).

The bigger and more detailed Celestial Buddy, named Our Precious Planet, debuted  at the New York Toy Fair last month. While Celestial Buddies already had an Earth plush in their lineup, the new toy is special because it focuses on climate change and what we all can do to help keep our home planet clean. So, it's not exactly the same as the one SpaceX just launched to the International Space Station, but one might argue that it's even cooler!

Our Precious Planet is a bit larger, with a diameter of 9 inches (23 centimeters), and features a more detailed and realistic depiction of Earth's continents than the company's previous versions.. The toy comes with an educational tag depicting some of the causes of global warming — such as car exhaust, deforestation and smog — on one side, and on the other, ways that people can help — like using solar panels, riding bicycles and turning off lights.

"Consistent with our mission to both enlighten and delight, this Special Edition Buddy is a gentle introduction to a very complicated but also very important subject," Celestial Buddies says on its website.

The company acknowledges that climate change is not entirely the fault of human behavior, but says that it is concerned enough about humans' contribution to these changes that, as an educational toy company, it feels a responsibility to address the issue. "We should give our families and educators a tool to help promote healthy discussions with our children about this important issue," the website reads.

Our Precious Planet certainly does that, and joins other squishy Earths, like Hugg-A-Planet, in bringing some cuteness to our global education. The plush toy is available from Celestial Buddies now for $24.99.