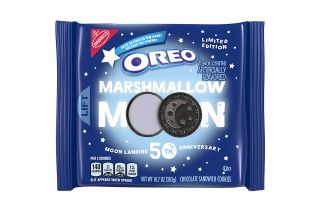 Nabisco is launching a tasty tribute to the 50th anniversary of the first moon landing.

The snack company on Tuesday (May 14) revealed its upcoming release of Oreo Marshmallow Moon cookies. The new limited edition flavor is set to land on store shelves in mid-June, just in time to celebrate the Apollo 11 mission that delivered the first humans to the surface of the moon on July 20, 1969.

Marshmallow Moon flavored Oreos "feature three fun, moon landing designs on the cookie with delicious purple marshmallow creme inside," a spokesperson wrote in an email to collectSPACE. "Plus, the cookies will come in glow in the dark packaging with anniversary sticker sets on pack."

The packaging for the Marshmallow Moon Oreos shows one of the three cookie designs inside — a waning crescent moon with three stars. The other two embossed motifs include an Apollo-like spacesuited astronaut standing by a flag with stars and a ringed planet in the sky and a space shuttle blasting through a field of stars and planets.

The pack, which has phosphorescent ink so that it glows in the dark, also includes the inscription, "Moon Landing 50th Anniversary."

Although the advent of Oreos in 1912 predates the Apollo 11 mission by some 57 years, astronauts Neil Armstrong, Buzz Aldrin and Michael Collins did not have the chocolate sandwich snacks on board their spacecraft to enjoy on the journey to the moon and back. They did have cookies, though, in the form of sugar cookies cut into cubes.

This is not the first time that Oreo has paid tribute to space exploration history. In August 2012, the cookie brand celebrated NASA's Curiosity rover landing on Mars with a "#dailytwist" social media post that showed an Oreo with rover tracks in the cookie's red-colored creme.

Oreo created a similar graphic to honor Armstrong after his death on Aug. 25, 2012. "To the man who made us believe in the impossible," the cookie brand wrote, adding "celebrating an American hero" as part of the image that showed the late Apollo 11 commander's spacesuited shadow cast over the white creme of an Oreo cookie.

Oreo is the latest brand to produce a limited edition offering in commemoration of the first lunar landing's 50th anniversary. Other companies that are marketing the moon milestone include Budweiser, Fisher Space Pen, Omega watches and Zippo lighters.