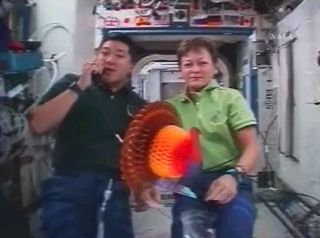 Long gone are the days of an astronaut's food choices being limited to what you could squeeze from a toothpaste tube.

Today?s spaceflyer?s have a veritable cornucopia of culinary choices packed away in their orbital cupboards to make mealtimes a bit more interesting while flying high above the Earth. Just in time for Thanksgiving, we give thanks on behalf of all space explorers for the top10 space foods of all time:

It may be a fine appetizeron Earth, but for many astronauts, freeze-dried shrimp cocktail is a must-havestaple. Why? Some attribute it to the lack of gravity. Without bodily fluids beingpulled down to their feet, astronauts? heads become congested, dulling thetaste of many foods. Shrimp cocktail and other spicy dishes are full of flavorand thus more desirable.

Looking for a way to engagestudents in spaceflight research, NASA, the Canadian Space Agency and otherinternational organizations have flown millions (if not billions by now!) ofplant seeds, the most popular being those for tomatoesand basil. Once back on Earth, kids are challenged to grow thespace-exposed seeds and compare their fruit to grounded control samples.Anecdotal evidence suggests space tomatoes are delish!

Red Bull may "give you wings"but Antimatter is the only energy drink that can claim its ingredients werefirst flown in space. Produced by Microgravity Enterprises, Inc., Antimatter?sspecial blend of vitamins and minerals were carried aloft by UP Aerospace?s SpaceLoft XL suborbital rocket in 2006 and 2007. If powerdrinks are not to your taste, the company also offers Comet?s Tail Amber Aleand Space20, the first beer and sports water made from flown inspace additives.

Space-bound collegestudents rejoice! The Cup Noodle that sustains your semesters has now beenredeveloped and repackaged forspaceflight. First consumed by Soichi Noguchiaboard STS-114 in 2005, Nissin?s trademark stringy ramen noodles were reshapedinto pasta balls for easier consumption, and as no boiling water is availableaboard the space shuttle, the soup was reformulated to cook in 70 degree water,but it still comes in four flavors: soy, miso, curry and pork broth.

Bite-sized sandwich cookieswith maple, cranberry or blueberry cream filling, these nutritional Oreo-likesnacks were the first Canadian astronaut food to fly (hence the maple leafdesign). Though reportedly enjoyed by Canadian Space Agency astronaut DaveWilliams aboard STS-118, the real demand has come from the public, which hasreportedly submitted as many as 10,000 requests for the handmade cookies.Officials are looking to license the recipe, so you may yet find Canasnacks on a store shelf near you soon.

Like the shrimp cocktail, astronauts have become attractedto spicy green beans, emphasis on the ?spicy?. But these aren?t just anyone?swell-seasoned legumes; these are chef Emeril Lagasse?s special recipe.One of several celebrity chefs invited by NASA to develop newdelicacies for the space station?s pantry, Emeril?sgreen beans stand out because they weren?t a one-hit wonder. With a few tweaks,the spicy green beans have filled a niche on the astronauts' menus.

In 1985, the Cola Wars reached new heights as NASA invitedboth the Coca-Cola Company and Pepsi, Co. to fly experimental dispensers for theultimate in taste tests. Unfortunately, the crew labeled the experiment afailure due to the zero-g environment and the lack of refrigeration. On thelighter-side, floating 'Pepsi balls' did provide a source of entertainment.Coke later flew again, but with pressurized cups and a dispensing machine.

The powdered orange juice drink made famous during the 1960sGemini program is still flying today on-board the space shuttle andInternational Space Station. Though not labeled as Tang brand, the companybehind its production, Kraft, also supplies NASA with the mix in a wide arrayof flavors, from the perennial favorite orange, to grape, to the more exoticorange mango and grapefruit orange.

It?s not cold, it?s dry aschalk, but it does melt in your mouth with the odd aftertaste of honest togoodness ice cream. While it?s true that the space shuttle and space stationare not equipped with freezer space for tasty frozen treats, nearly all of thefreeze dried ice cream sold and consumed goes to space fans on the groundwanting a taste of the astronaut life. 'Nearly all' because according to NASA,freeze-dried ice cream has flown, but only once, and at the specific request ofa crewmember.

Your mother told you not to play with your food but combineM&Ms and weightlessness and you?re just inviting astronaut impersonationsof Pac-Man. While other sweets do fly, the hard candy shell with chocolatecenter that 'melts in your mouth, not in your hand' seems perfectly suited forspaceflight.

?I think they say, ?they melt in your mouth and not in thelab,?? Expedition 16 flight engineer Dan Tani said ofthe chocolate treat this week.

NASA labels the M&Ms as 'candy-coatedchocolates' as to not inadvertently advertise any specific brand, but in1996, Shannon Lucid set the record straight from on-board the Mir spacestation: 'I guess the only thing that would be niceis to have a few more M&M's.