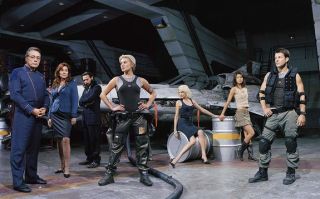 "Battlestar Galactica" is about to launch back to TV...again.
(Image: © Syfy)

"BSG fans, this will not be a remake of the amazing series Ronald D. Moore launched because... why mess with perfection?" Esmail tweeted. "Instead, we’ll explore a new story within the mythology while staying true to the spirit of Battlestar. So say we all!"

While not outright saying it, Esmail seems to be implying the new show will exist within the same continuity or shared universe of the Moore series. Since the conclusion of Moore's "Battlestar Galactica" in 2009, two spin-off series - "Caprica" and "Blood & Chrome" - were produced.

Esmail is developing the new Battlestar Galactica show for NBCUniversal's just-announced Peacock streaming service, which is scheduled to debut in April 2020.