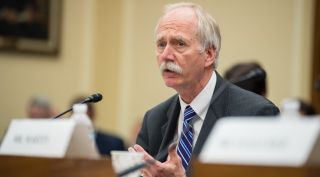 WASHINGTON — In a move that took most people in the space industry by surprise, NASA has reassigned two top officials in its exploration program, including Bill Gerstenmaier, the longtime head of NASA's human spaceflight programs.

In a memo to NASA employees issued late July 10, NASA Administrator Jim Bridenstine said Bill Gerstenmaier, associate administrator for human exploration and operations, had been reassigned to serve as a special assistant to NASA Deputy Administrator Jim Morhard. The reassignment was effectively immediately. Bridenstine said that Ken Bowersox, a former astronaut who rejoined the agency earlier this year as Gerstenmaier's deputy, would take over as acting associate administrator.

Bridenstine's memo gave few specifics about why he was replacing Gerstenmaier and Hill. "As you know, NASA has been given a bold challenge to put the first woman and the next man on the moon by 2024, with a focus on the ultimate goal of sending humans to Mars," he wrote. "In an effort to meet this challenge, I have decided to make leadership changes to the Human Exploration and Operations (HEO) Mission Directorate."

Moving personnel into "special advisor" positions is typically considered a demotion for those who cannot be terminated outright. Those positions have few, if any, responsibilities, and those reassigned as special advisors usually leave the agency shortly thereafter.

The timing of the reassignments took most within and outside the agency by surprise. Bridenstine, speaking at the Future Space 2019 conference here July 10, offered no hints of an impending shakeup, offering a general overview of NASA's exploration plans, including development of the lunar Gateway.

Gerstenmaier also provided no signs of a reassignment when he testified July 10 before the House Science Committee's space subcommittee on commercial activities on the International Space Station. His testimony, and the overall hearing, focused on the low Earth orbit commercialization strategy that NASA announced in June.

Some have speculated that the reassignments are the result of displeasure by agency leadership, and possibly the White House, at the pace of development of the Artemis lunar program and its key elements, the Space Launch System and the Orion spacecraft.

"The president has directed NASA and administrator Jim Bridenstine to accomplish this goal by any means necessary," Vice President Mike Pence said in a March speech where he announced the 2024 lunar landing goal. "You must consider every available option and platform to meet our goals, including industry, government and the entire American space enterprise."

Gerstenmaier, who joined NASA in 1977 as an engineer at the Lewis Research Center (now Glenn Research Center) in Cleveland, later took on management positions in the shuttle and ISS programs before becoming associate administrator for space operations in 2005. He became associate administrator for human exploration and operations in 2011 when NASA merged its exploration and space operations mission directorates.

Gerstenmaier, or "Gerst," has gained almost universal admiration and respect in the industry for his leadership and expertise, and has been frequently called upon by Congress to testify about NASA's human spaceflight activities. "He is becoming a regular when it comes to testifying before us," said Rep. Kendra Horn (D-Okla.), chair of the House space subcommittee, in opening remarks at the July 10 hearing. "We are glad to see you again and appreciate you being here as we consider these important issues."

"Can't overstate the importance of Gerst to NASA over the past few decades," tweeted Garrett Reisman, a former NASA astronaut who later worked at SpaceX and is now a University of Southern California professor. "He was the glue that kept NASA and Congress moving forward after Constellation. Once I told him that he was the only single point failure in the Human Spaceflight Program."

He added praise, though, for Bowersox, another former astronaut who also worked at SpaceX. "I have tremendous respect for him," he wrote. "He is a man of integrity that will serve NASA well."