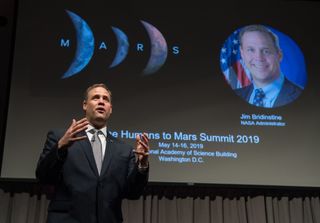 WASHINGTON — A mission to the moon may be a good "steppingstone" for sending humans to Mars, but the experts are divided over whether NASA's new push to put humans on the moon in 2024 will help get the agency to Mars by the 2030s.

This spring, Vice President Mike Pence directed NASA to put "the next man and the first woman" on the lunar surface by 2024, four years earlier than the agency had planned. President Donald Trump had originally proposed a 2028 moon landing with his Space Policy Directive-1, but he chose to speed up the process over concerns of a new "space race" with China and Russia. That news was received with a mix of cautious optimism and doubt among members of the spaceflight community, many of whom are now tasked with figuring out how to make a moon landing happen with a limited budget and limited time.

Earlier this week, Trump published an amended budget request for fiscal year 2020 that includes an additional $1.6 billion (on top of the agency's $21 billion overall budget) to help NASA work toward that goal of landing on the moon in 2024. NASA administrator Jim Bridenstine called the extra cash a "down payment" for NASA's accelerated moonshot, which will require more cash flow if the agency is going to make it to the moon in 2024 and Mars in the 2030s.

"We're going to the moon because we want to get to Mars with humans," NASA Administrator Jim Bridenstine said Tuesday (May 14) here at the Humans to Mars Summit. By accelerating the timeline for getting astronauts back on the moon, "we are by definition accelerating the humans to Mars program," he added.

The agency has said that it plans to land astronauts on Mars in the 2030s, following President Barack Obama's request in 2016. The following year, Trump requested a nongovernmental,  independent report about the possibility of launching humans to Mars in 2033 in his NASA Authorization Act of 2017. Although Bridenstine has said that NASA wants to achieve a landing in 2033, he hasn't offered a new timeline for Mars based on the moon mission just yet.

In February, the independent report from the Science and Technology Policy Institute (STPI) concluded that NASA will not be able to land astronauts on Mars until the late 2030s — regardless of how much funding is available. That report was published before Pence announced NASA's accelerated timeline, and it doesn't account for the newly adjusted budget request. But according to the report, no amount of money can put astronauts on Mars by 2033, because there simply isn't enough time to develop, build and test all the technologies needed for that kind of a mission.

Despite the findings of that report, however, Hoppy Price, chief engineer of NASA's robotic Mars exploration program, said here at the Humans to Mars Summit that he still thought a crewed lunar landing in 2024 could lead to human mission to Mars in 2033 "if sufficient funding was available."

Price suggested NASA could build an infrastructure in Mars orbit similar to the Lunar Orbital Platform-Gateway that the agency intends to put in orbit around the moon. That gateway could serve as a "home base" for the first human missions to Mars, and astronauts would complete only short-duration missions to the surface using a separate ascent/descent vehicle. This kind of architecture "would utilize more near-term technology systems and avoid a lot of the risks that were cited in the STPI report," he said, and explained that it would be more cost-effective and time-efficient to build upon existing technologies.

In another panel discussion, Ken Bowersox, a former NASA astronaut who recently became the deputy associate administrator for NASA's Human Exploration and Operations Mission Directorate, said that NASA's original plan to land astronauts on the moon in 2028 "was really pretty aggressive with the budget we were considering doing it with." However, he didn't seem discouraged by the accelerated timeline, calling the news "awesome" and "exciting."

"I think it's going to be good for us," Bowersox said. "I think it's going to help us change in ways that will be better for the whole agency, and it will help us not just get to the moon but on to Mars and past Mars one day." He said the 2024 moonshot will force NASA to learn how to make missions simpler, easier and more affordable — qualities that may be useful for more than just one rushed mission to the moon and could help us get to Mars faster. "Everything we do in this program is intended to inform our journey to Mars," Bowersox said.

One thing that Bowersox said would be "key" to putting humans on Mars in 2033 is another big call to action much like President John F. Kennedy's famous moonshot speech before Congress in 1961, and the speech Pence gave in March, when he announced that NASA would be putting "boots on the moon" in 2024 instead of 2028. Bowersox suggested that whoever is president of the United States in 2025 or 2026 should give a similarly historic speech declaring NASA's goals for human exploration of Mars with a concrete timeline.