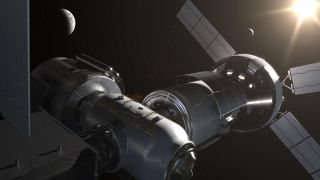 NASA plans to start building a moon-orbiting space station called the Lunar Orbital Platform-Gateway in 2022. This outpost will be a waypoint for future missions to the lunar surface and more-distant destinations, such as Mars, agency officials say.
(Image: © NASA)

The moon has not superseded Mars as a human-spaceflight target, despite NASA's current focus on getting astronauts to Earth's nearest neighbor, agency officials stressed.

The Red Planet remains the ultimate destination, and the moon will serve as a stepping stone along the way, Jim Bridenstine, NASA administrator, and Bill Gerstenmaier, associate administrator of NASA's Human Exploration and Operations Mission Directorate, said during congressional hearings yesterday (Sept. 26).

"The moon is the proving ground, and Mars is the goal," Bridenstine said during testimony before the Subcommittee on Space, Science and Competitiveness, part of the U.S. Senate's Committee on Commerce, Science and Transportation. [How Will a Human Mars Base Work? NASA's Vision in Images]

"The glory of the moon is that it's only a three-day journey home," Bridenstine added. "So, we can prove all of the technologies, we can reduce all of the risks, we can try all of the different maturations that are necessary to live and work on another world. And we can do it all at the moon, where, if there is a problem, if there is an emergency, we know that we can get people home."

He cited NASA's Apollo 13 mission in 1970, which famously managed to make it safely back to Earth despite experiencing a serious problem on the way to the moon.

Far from delaying a crewed Mars mission, which NASA aims to execute in the 2030s, the current and near-future moon work should "accelerate our path to get to Mars," Bridenstine said.

This reassurance is in keeping with the language of Space Policy Directive 1 (SPD 1), which has spurred much of the moon work. SPD 1, which President Donald Trump signed in December of 2017, instructs NASA to return astronauts to the moon as part of a sustainable exploration program that will eventually bring more-distant destinations, such as Mars, within reach.

And about the current moon work: NASA plans to begin building a small space station in lunar orbit in 2022. This outpost, called the Lunar Orbital Platform-Gateway, could be ready to accommodate astronauts by 2026, NASA officials have said.

These crewmembers will stay aboard the Gateway for 30- to 90-day stretches, conducting a variety of science and exploration work. Some of these astronauts will head from the Gateway down to the lunar surface; the first such sorties could occur before the end of the 2020s, according to NASA officials.

Gateway visits, both human and robotic, won't all be NASA endeavors if everything goes according to plan. The U.S. space agency aims to make the outpost "interoperable" and open to use by private companies and other nations.

"Mars is not [taking] a back seat to the moon. What we see is, we need to do the activities around the moon to really prepare us to go to Mars," Gerstenmaier said in his appearance before the Subcommittee on Space, which is part of the U.S. House of Representatives' Committee on Science, Space and Technology.

"I don't think we're ready to go to Mars directly today," he added. "I see the moon as an enabler for Mars."

Gerstenmaier touched on the enabling nature of Gateway technology, singling out one piece of complex hardware as an illustrative example.

"So, this Gateway spacecraft we talk about around the moon — it can be moved to different locations around the moon. It could also be the basis for a Mars spacecraft," he told the subcommittee members. "We're going to try to size that ascent vehicle that comes off the moon — it takes the crews from the surface of the moon to Gateway — that vehicle will be sized toward a Mars-class lander."