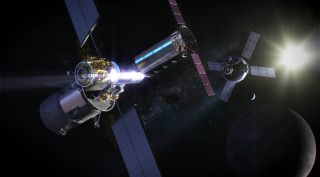 WASHINGTON — NASA will issue a formal call for proposals later this summer for cargo transportation services for its lunar Gateway, seeking to model that effort on the space station's commercial cargo program.

NASA released a draft request for proposals (RFP) for its Gateway Logistics Services program June 14, seeking industry comment by July 10. The agency will also hold an industry day for the program at the Kennedy Space Center June 26 before releasing a final RFP later in the summer.

NASA plans to acquire services through the program for the transport of pressurized and unpressurized cargo to the lunar Gateway, and disposal of cargo from the Gateway, similar to the services it uses now to transport cargo to and from the International Space Station. It's the latest part of an ongoing effort to maximize commercial services for the Artemis program, which seeks to land humans on the south pole of the moon by 2024 and establish a sustainable human presence at the moon by 2028.

Related: NASA's Grand Plan for a Lunar Gateway Is to Start Small

"The Gateway, and specifically our logistics supply requirements, enables the deep space supply chain, taking the next step toward further commercialization of space," Mark Wiese, manager of the Gateway logistics element at KSC, said in a NASA statement.

According to the statement of work and requirements documents included in the draft RFP, each mission would be required to deliver at least 3,400 kilograms of pressurized cargo and 1,000 kilograms of unpressurized cargo to the Gateway. The spacecraft must be able to remain docked to the Gateway for up to three years, and depart with at least as much cargo as it delivered for disposal "to a government-approved safe and stable end-of-mission disposal orbit or other government-approved disposal location."

The company providing the logistics services would be responsible for launching the cargo spacecraft, with the only requirement from NASA that the vehicle configuration have performed at least one successful launch prior to the first cargo mission.

The RFP doesn't mention a flight rate for such missions, but states that a single logistics mission is designed to support two crewed visits to the Gateway of up to 90 days each. NASA is currently projecting one crewed mission a year through at least the late 2020s.

The draft RFP includes options for additional logistics services beyond the baseline transport of pressurized and unpressurized cargo. That includes the ability for "fast transit" of the cargo spacecraft so it arrives at the Gateway within 30 days of launch. Other options include refueling, additional payload power, long-term habitation and the ability to be co-manifested on a Space Launch Services mission.