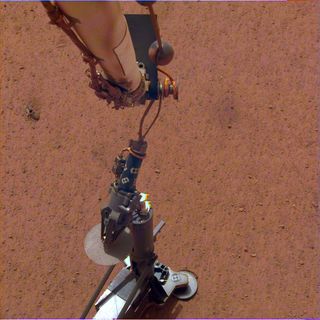 THE WOODLANDS, Texas — Engineers are still trying to understand why one of the main instruments on NASA's InSight Mars lander is stuck just below the Martian surface.

In presentations at the 50th Lunar and Planetary Science Conference here March 18, project officials said they plan to spend the next few weeks determining why the probe on the Heat and Physical Properties Package (HP3) instrument, designed to measure the heat flow in the interior of the planet, is stuck about 30 centimeters below the surface, well short of its desired depth of three to five meters.

Spohn said at the conference that the team speculated that the probe hit a rock shortly after burrowing into the surface that deflected it by about 15 degrees but allowed it to continue. "At about 30 centimeters depth, we encountered something," he said. "We don't know yet if it's a harder layer of regolith or a rock."

The instrument team is working to diagnose the problem, he said, including seeing if the problem is with the instrument itself or the material it is trying to penetrate. One possibility is to use the lander's robotic arm to pick up the support structure on the surface to see if the mole is sticking out, but Spohn said any such plan would need to be "carefully considered" first.

If the problem is with the Martian subsurface, he said, "I think what we can do is just continue hammering and see if we get through that layer or not."

Bruce Banerdt, principal investigator for the overall mission, said that the spacecraft is taking images of the instrument on the surface to help diagnose the problem. "We can probably start trying to penetrate again in a few weeks," he said. "Before that, we want to make sure we're doing the right things."

The other main instrument on InSight, a seismometer called the Seismic Experiment for Interior Structure, is working well. The instrument is now in place on the Martian surface and covered with a wind and thermal shield. Banerdt noted that the instrument's noise level is about a factor of 100 below the best seismometers on Earth.

The only problem with the seismometer is that it has yet to detect a Marsquake, a lack of activity he said is not surprising. "This is exactly where we expected to be," he said. The instrument has been fully operational for about a month, he said, and before the mission he expected to detect 10 to 12 quakes per Earth year.

Philippe Lognonné, principal investigator for the instrument, said in a separate presentation that the seismometer was working well. "Now, of course, we are waiting for a quake."