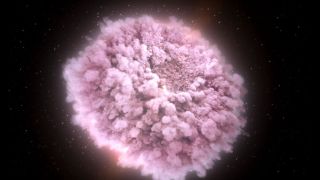 An illustration shows a supernova, one of the events raised as a possible source for the wave.
(Image: © NASA Goddard Space Flight Center)

Thursday (Nov. 14) marked the end of a thrilling, mysterious and ultimately disappointing five days in astrophysics.

Telescopes all over the planet and in space spun on their axes last Sunday (Nov. 10), rushing to scan the sky for the source of a mysterious, never-before-seen gravitational wave spotted by three separate detectors in Washington state, Louisiana and Italy. No one was sure what it was. It didn't match the waves that come from black hole mergers or colliding neutron stars. The finding sparked an international hunt for an "electromagnetic component" to the signal, a flash of light that would identify the point in the sky from which the wave came and might explain what caused the phenomenon.

But observatories around the world failed to find any visible light, X-rays or neutrinos that might have been ejected from an exploding star or other gravitational-wave-making event.

"Bupkis," said Kathleen E. Saavik Ford, an astrophysicist at The City University of New York and a research associate at the American Museum of Natural History, scrolling through a list of telescope reports Thursday.

Saavik Ford, who wasn't involved in the detection effort but followed it closely, told Live Science at the time that failing to see anything in the sky wasn't a sure sign that nothing was there. There might have been a supernova somewhere toward the center of the Milky Way, where the light and dust of other stars would obscure the object's light from our view. Or maybe two black holes much farther away just collided and produced a weird wave pattern no one had predicted. Or something else that we haven't guessed at might be out there making bursts of gravitational waves, with this event being just our first glimpse at it.

And all three of the world's gravitational wave detectors reported the signal: both of the Laser Interferometer Gravitational-Wave Observatory (LIGO) twin detectors in Livingston, Louisiana, and Hanford Site, Washington, as well as the Virgo detector near Pisa, Italy. Each detector has two arms at right angles to one another, the lengths of which the device measures using lasers. When gravitational waves pass through the detectors, the waves distort space, shrinking and lengthening the arms.

Any one of the three detectors might easily produce a readout of a gravitational wave signal, said Erin Macdonald, an astrophysicist who previously worked in the LIGO scientific collaboration and now works as a scientific consultant for science-fiction television and movies.

"These detectors, it's crazy how sensitive they are," she said.

"The Washington and Louisiana detectors, those arms are 4 kilometers [2.5 miles] long, and they're detecting signals that are about one-one-thousandth of an atom, the changes in those arms," she said. "And so the mirrors that they're using have really complex suspension systems and really careful mirror coatings. But because they're so sensitive, they pick up all sorts of noise sources."

The detector in Louisiana, for example, is about 80 miles (130 km) inland, but the sea still affects it.

"On a windy day, they can pick up waves on the coast," Macdonald said. "They can also pick up trucks going by hundreds of miles away."

But there are operators at each site trying to weed out noise by watching train schedules, seismic activity and local weather, among countless other factors. In Washington, researchers have even learned to recognize the faint signals of rabbits hopping by the buried arms.

The LIGO collaboration puts a number on just how likely it was that each event was an error. In this case, the event termed "S191110af" would turn up under false pretenses only once per 12.681 years of detector runtime at the current level of sensitivity, the group said.

Once in 12 years isn't a mind-blowing coincidence, Saavik Ford said, so it was never out of the question that S191110af might have been a fluke. But still, she said, astrophysicists had good reason to hope this one was real. It looked like the first of a new class of signals they'd been long waiting for, and the odds of stumbling into a fake version so soon at all three detectors were a bit like getting the worst possible roll of the dice on the first try. So, by Thursday, many researchers were still hopeful.

"If it is a real event, this would be an unmodeled burst not picked up by our compact binary coalescence pipelines," Albert Lazzarini, deputy director of LIGO at Caltech, told Live Science in an email Thursday afternoon.

Compact binary coalescence pipelines are the algorithms the collaboration uses to spot bursts that match black hole and neutron star mergers. So in other words, this signal would have been something strange, of a category that LIGO had never detected before.

All sorts of events happen in the universe that we don't know about until we stumble across them, Saavik Ford said. Back in the late 1960s, the United States put four satellites in space designed to hunt for electromagnetic signatures of Soviet nuclear tests, but those satellites instead detected gamma-ray flashes that didn't match any nuclear weapon signature. Only by the 1970s did astrophysicists confirm that the bursts were coming from the wrong direction, that they were in fact signals from deep in space that had never been predicted.

As of Thursday, Saavik Ford said, it was possible something similar was happening with these wave signals.

"This is a whole new way of sensing the universe," she said, "If several more unmodeled bursts without electromagnetic components happen in the next five years, we'll know [something mysterious is really out there]."

But at 6:14 p.m. EST that same day, Christopher Berry, an astronomer at Northwestern University in Illinois and a member of the LIGO collaboration, tweeted, "Alas, #S191110af has now been retracted!"

In a follow-up tweet responding to a question from Live Science, he explained how the error turned up in three sites separated by thousands of miles.

"Random bad luck," he said. "The glitchiness was only in one detector, but it seemed to match with some random typical noise elsewhere by chance. That's what the search algorithms should factor in to their false-alarm rates, but when it's a new type of noise, that doesn't always work out."