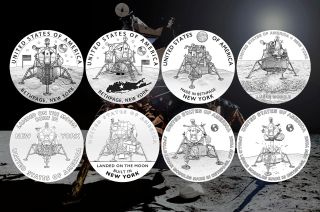 A proposal to land the Apollo lunar module on the reverse side of a new $1 coin has been waved off by the committees reviewing the design.

The historic moon lander was among the three subjects considered for New York's dollar in the U.S. Mint's American Innovation coin program. Launched in 2018, the multi-year series honors innovations or innovators from each of the 50 U.S. states, Washington, D.C. and the American-owned territories.

The Apollo lunar module, which landed 12 astronauts on the moon between 1969 and 1972, was designed and built for NASA by Grumman Aircraft (today Northrop Grumman) at the company's facilities in Bethpage, New York.

"A total of 13 lunar modules were built in New York, and six made lunar landings. All of them bear a nameplate reading, 'Made in Bethpage, New York,'" April Stafford, director of the U.S. Mint Office of Design Management, told the members of the Citizens Coinage Advisory Committee (CCAC) during a March 11 meeting.

"The moon landing[s] could not have happened without the lunar module," said Stafford.

Eight of the Mint's 19 designs for the 2021 New York coin featured the Apollo lunar module. The other artwork focused on the themes of baseball and the Erie Canal.

"While the story of Abner Doubleday inventing baseball in New York is more a myth than fact, New York is traditionally considered the epicenter of the baseball world," Stafford said of the potential theme. "The Erie Canal ... opened the way for the Atlantic Seaboard to the North American interior and helped establish New York as a leader in population, industry and wealth for much of the 19th century."

Weighing all of the designs, the majority of the CCAC's 11 members said they split between the Erie Canal and the lunar module.

"One of the challenges with this Innovation dollar program is that sometimes we are choosing themes and we are really to be choosing artwork," said Thomas Uram, CCAC chair, in an interview with collectSPACE.com. "It was very close in the discussion."

For some of the committee members, the question was one of importance versus icon status.

"While we all get the importance of the Erie Canal because we're nerds — you know, we're essentially nerds — and we get it, most of America is really not going to get it. Most of America is going to get the lunar lander," said Donald Scarinci, a member of the CCAC since 2005 who has one of the largest privately held collections of art medals in the United States. "Most Americans can kind of get the significance of man walking on the moon."

"Even though we don't like to say it, we are in the business of selling coins, right? There is a precedent that things that are space-related do tend to sell. People like space," said Scarinci.

On the flip side, some members saw value in the often overlooked.

"I would point out that the Mint has honored baseball on coins, it has honored the lunar landing on coins, but it has never recognized the importance of the Erie Canal on a coin," said Dennis Tucker, a numismatic researcher who joined the CCAC in 2016. "This an opportunity for the Mint to recognize a great New York State innovation, so I believe that the Erie Canal is far [and away] the best theme for this coin program."

Built in 1825, the Erie Canal has been recognized on commemorative medallions and was included in the design of the New York state quarter released by the U.S. Mint in 2001, but it was not the focus of the latter.

Initially voting on all of the designs, the CCAC members ranked one of the Erie Canal concepts as the favorite, outranking one of the lunar module proposals by just three points. Ultimately, the committee decided to recommend a design depicting a mule-drawn barge on the Erie Canal being pulled from a city in the east toward the country areas to the west.

Both committees' findings are only recommendations, though. The final decision lies with the Secretary of the U.S. Treasury, Steven Mnuchin.

The New York dollar was the third American Innovation coin to consider or adopt space as a theme. The first, issued for Delaware on Nov. 7, 2019, honored astronomer Annie Jump Cannon, who invented a system for classifying the stars that is still in use today. The second, which remains under consideration, would feature the Hubble Space Telescope on the 2020 Maryland dollar, 30 years after the orbiting observatory was launched.