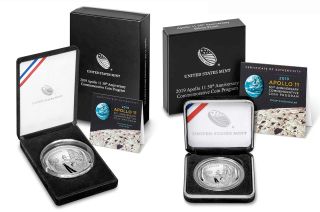 The United States Mint's mission to commemorate the first moon landing, Apollo 11, has reached its end.

"Time is running out to own these stunning coins memorializing a remarkable milestone in American history," the U.S. Mint wrote to its customers, promoting its "last chance" commemorative coin sales. "The 2019 Apollo 11 50th Anniversary Commemorative Coin Program celebrates the 1969 lunar landing — one of mankind's greatest achievements — with a spectacular collection of curved coins."

Released on Jan. 24, 2019, as authorized by Congress three years earlier, the Mint's Apollo 11 50th Anniversary coins celebrated the NASA mission that saw astronauts Neil Armstrong and Buzz Aldrin become the first people to walk on the moon. The gold, silver and clad commemoratives were only the second curved coins struck by the U.S. Mint.

"Each time a person looks at one of these [coins] it will serve as a reminder of the unprecedented engineering, scientific and political achievement that secured our country's leadership in space for generations," said U.S. Mint director David Ryder in a statement at the time of the coins' introduction.

The coins shared a common design, based on artwork produced by the Mint's in-house sculptors and the winner of a public art contest.

The convex or tail's side of the coins resembled the outward curve of an spacesuit helmet and featured a design based on an iconic photograph of Aldrin's visor, showing the Apollo 11 lunar module "Eagle," the American flag and Armstrong on the moon's surface.

The concave or head's side curved inward to the engraved image of Aldrin's boot print in the lunar soil. The design also featured the names of the three NASA human spaceflight programs that led up to the first moon landing: Mercury, Gemini and Apollo.

Two of the proof-quality clad metal half dollars were launched to the International Space Station in May and returned to Earth in June. They have since become part of the Smithsonian's and U.S. Mint's collections.

The only sell out was the Apollo 11 50th Anniversary 2019 proof half dollar set, which in addition to the commemorative included an enhanced reverse proof Kennedy half dollar, recognizing the "enduring relationship between President Kennedy and the American space program." The set was limited to 100,000 units and retailed for $54.

The U.S. Mint also produced a proof silver dollar set with a President Kennedy-themed Apollo 11 intaglio print for $79 that will go off sale with the other coins on Friday night.

Proceeds from coins have benefited three organizations that preserve space history and promote science and engineering education: the Astronauts Memorial Foundation, the Astronaut Scholarship Foundation and the Smithsonian National Air and Space Museum's "Destination Moon" gallery, scheduled to open in 2022.

After Friday, the Apollo 11 50th Anniversary coins may still be for available on the secondary market, including a silver dollar set with an Apollo 13 autographed print offered by the Astronaut Scholarship Foundation and silver dollars mounted with Buzz Aldrin's autograph from the Astronauts Memorial Foundation.