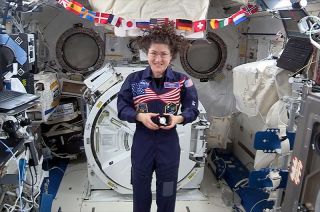 A curved tribute to the 50th anniversary of the first moon landing recently completed a trip around the curvature of the Earth many times over.

Two commemorative coins from the United States Mint were flown on board the International Space Station for 28 days. The domed, half dollar coins traveled to orbit and back on a SpaceX Dragon cargo spacecraft.

NASA astronaut Christina Koch displayed one of the two coins in a video recorded for the Mint.

"Fifty years ago, we took our first small steps onto the moon and made a giant leap that united and inspired the world. NASA accomplished this 50 years ago for all of humankind," Koch said, referencing the July 1969 lunar landing. "We are honored by the U.S. Mint issuing this commemorative coin celebrating the accomplishment of NASA, our nation and every human who dares to dream."

Gold, silver and clad coins were struck to mark the half century since astronauts Neil Armstrong, Buzz Aldrin and Michael Collins achieved the world's first moon landing mission in July 1969. The commemoratives are only the second coins in the U.S. Mint's history to be curved.

The coins' reverse, or tail's side, is convex, resembling the outward curve of an astronaut's helmet and feature a design based on an iconic photograph of Aldrin's visor, showing the lunar module "Eagle," the American flag and Armstrong on the moon's surface.

The obverse, or head's side, is concave, curving inward to the engraved image of Aldrin's boot print in the lunar soil. The design also features the names of the three NASA human spaceflight programs that led up to the first moon landing: Mercury, Gemini and Apollo.

"As with all U.S. Mint commemorative coins, they are made for all and available to all," Koch said.

In January, the U.S. Mint released the coins for sale in half dollar, dollar and five dollar denominations, in proof and uncirculated finishes, with limited editions of 50,000 to 750,000. Since then, the U.S. Mint has partnered with Australia's and Spain's mints to issue coin sets recognizing the tracking stations that supported the Apollo 11 mission.

The Astronaut Scholarship Foundation, which awarded Koch a scholarship when she was an undergraduate studying electrical engineering and physics, provided Sam Scimemi, director for the International Space Station at NASA Headquarters, with the two coins that were flown into space.

The proof-quality, clad half dollar coins were launched to the station on May 4 and returned on June 3 aboard SpaceX's CRS-17 mission. Now back on Earth, one of the coins will be displayed by the U.S. Mint.

The second coin "will go on display in our upcoming Destination Moon exhibition," the National Air and Space Museum announced on Twitter.

Koch said that she hopes the trip to the International Space Station will be just the first launch for the Apollo 11 coins.

"These coins have made the small step here, to the International Space Station, and I hope when we are building a sustainable presence on the moon and make that next giant leap onto Mars, the coins will go along on our journey as a reminder of all the hard work and sacrifice that moves us all forward," she said.