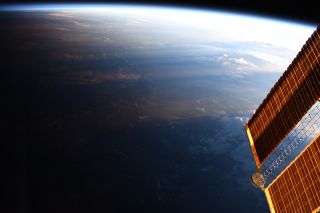 A photograph shared by NASA astronaut Christina Koch shows the boundary between day and night on Earth.
(Image: © NASA)

An evocative new photo from the International Space Station shows what it's like to fly along the line between darkness and daylight on planet Earth.

Expedition 59 astronaut Christina Koch posted the eerie view on Twitter May 20 from one of the windows of the station; the view includes a glimpse of one the orbiting complex's solar arrays. Below, night gradually gives way to daylight as clouds streak above the Earth's surface.

"A couple times a year, the @Space_Station orbit happens to align over the day/night shadow line on Earth," Koch wrote with the posted photo. "We are continuously in sunlight, never passing into Earth's shadow from the sun, and the Earth below us is always in dawn or dusk. Beautiful time to cloud watch." Koch added the hashtag #nofilter, which means the photo wasn't pretreated with any filters before posting.

While Koch was enchanted, former NASA astronaut Mike Fossum's reply showed that some astronauts prefer different views of Earth. "This was my least favorite time on orbit because our view of my favorite planet was at its worst — always distorted by low angles of light," he said. "Couldn't wait for clear days and clear nights to capture images! But enjoy your journey through the Shadowlands!"

Koch is expected to spend nearly a year in orbit, which will give her the second-longest spaceflight of any American astronaut. Also this week, Koch — a former National Oceanic and Atmospheric Administration employee — sent greetings to a NOAA conference expressing her love of looking at the planet that the agency is dedicated to studying.

"From here," Koch said of her perch in orbit, "we have an amazing view of our home planet, Earth. Looking outside the window of the ISS is a humbling and inspiring experience. It really brings into focus how important it is that we treasure this planet that we have."

Koch also paid tribute to employees in NOAA's Global Monitoring Division, which studies greenhouse gases, the carbon cycle, recovery of ozone in the stratosphere, and changes in clouds, aerosols and surface radiation. Before joining the astronaut corps, Koch worked at GMD's Baseline Observatory in Utqiagvik (formerly known as Barrow), Alaska and at the American Samoa Observatory, where she served as station chief. Koch said in her message she also worked "hand in hand" with GMD when she spent a winter at Amundsen‐Scott South Pole Station earlier in her career.