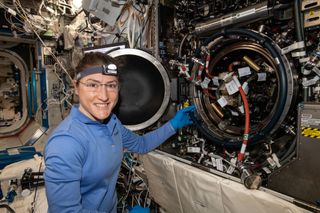 NASA astronaut Christina Koch arrived at the International Space Station in March and will remain there for nearly a year.
(Image: © NASA)

NASA's next long-duration spaceflight mission has already begun, and doctors are excited about what it could teach them.

Astronaut Christina Koch will spend nearly a year aboard the International Space Station, NASA announced on Wednesday (April 17), with her return trip delayed to February 2020. During her 11 months in space, she will monitor how her body responds to the mission, producing much-needed data about how well human bodies can withstand the dangers and hardships of long-term spaceflight.

So far, that data has been difficult to come by. Standard space station missions last about six and a half months, and only a handful of NASA astronauts have stayed in orbit longer than 200 days in a single spaceflight. That's problematic for an agency that has its sights set on human journeys to Mars — a six- to eight-month flight in each direction — within a decade or two. Koch's long mission in Earth orbit could offer peace of mind about what the impacts of such a journey might be; it could also shed light on how men and women respond differently to spaceflight, NASA officials said.

"It's a very exciting development. I think it's a positive step toward an understanding of how the body adapts in space," Saralyn Mark, a women's health specialist who led a NASA-requested set of reports examining potential sex differences in response to spaceflight, told Space.com. "Every piece of information you get is valuable, and certainly the longer-duration missions will give us greater insight into what it takes to keep people healthy through missions to the moon and to Mars."

Although the extended mission came about to accommodate the week-long visit of an astronaut from the United Arab Emirates, NASA was eager to jump on the opportunity of having a crewmember on board the station for an extended stay.

To date, just three NASA astronauts have remained on board the space station for more than 200 days straight. Scott Kelly holds the NASA record after a 340-day visit, Peggy Whitson completed a 289-day spaceflight and Michael Lopez-Alegria flew 215 days straight. (Russia's spaceflight program has more long-term missions under its belt, with the Soviet Union and Russia combined having sent a dozen men on spaceflights longer than 200 days.)

And while long-term spaceflight data is rare enough, doctors said Koch's mission extension could offer something even rarer: a better understanding of how sex-based differences affect a body's response to spaceflight. About 12% of spacefarers to date have been women. But men's and women's bodies are built differently and have different chemical balances.

"It's really important to look at both men and women, because the physiology of men and women are very different," Brinda Rana, an associate professor at the University of California, San Diego who studied compounds in Kelly's blood during his mission, told Space.com. "There's data that shows that men and women have a different response to spaceflight."

Coincidentally, the new flight schedule was announced just a week after dozens of researchers published a detailed analysis known as the Twins Study. That research was based on measurements taken before, during and after Scott Kelly's nearly year-long spaceflight and compared his health with that of his brother, Mark Kelly, who is also a NASA astronaut but who remained on Earth during the study.

As identical twins, the Kellys offered NASA a rare opportunity to compare how each brother's cells manufactured proteins from the same basic genome, but in very different environments. "The twins were important because we had genetically identical individuals," Susan Bailey, a professor at Colorado State University who tracked a genetic structure called telomeres during the Twins Study, told Space.com. "Any kind of changes that we saw during spaceflight really could be attributed to spaceflight."

Most astronauts don't come with a twin, but doctors say that Koch's experience during a mission of nearly the same length can still teach them a lot. And although spaceflight studies don't have the large sample sizes that scientists truly want, there's still plenty to learn from the experiences of the few who do make long stays.

"You're never going to have extraordinarily large numbers of people in space, and yet you need to take care of people who do explore," Mark said. "There is power in the small numbers. You also have to understand that there are individual differences."

A NASA spokesperson couldn't confirm the precise set of tests and measurements that Koch will face during her long flight. But since her arrival at the orbiting laboratory in March, Koch has already gathered data for a range of different experiments being conducted on the space station, according to NASA reports about her daily activities.

Those projects include an experiment known as VECTION, which studies how the vestibular system processes an individual's movements in microgravity. Koch has also taken measurements and blood samples for Myotones, which looks for changes in muscle tone, stiffness and elasticity during a flight. And she has measured her brain's ability to control blood flow, her oxygen uptake and her vision.

She is also likely taking part in a standardized set of measurements targeting astronauts' sleep, brain response, compounds in the blood and psychological response to spaceflight that all NASA astronauts can volunteer to participate in during missions, John Charles, a former chief scientist of NASA's Human Research Program and a co-author on the Twins Study who is now retired from NASA, told Space.com.

But chances are Koch won't be taking part in any tailor-made studies of the sort of scope that Kelly did during his long mission, Charles said, because scientists and doctors didn't have advanced notice of her extended mission. Nevertheless, he said the mission is a good opportunity to further hone what he sees as the real takeaway from the Twins Study: that while spaceflight is rough on the body, one-year missions aren't much worse than standard six-month stays.

"We got, I think, some good news from Scott Kelly. … It means we do understand what happens to the human body in spaceflight," Charles said. "I'm cautiously optimistic: if Christina's results support the findings from Scott's study, I think we're in a good position [to embark on even longer missions]."

Studying people on the space station can't address all of doctors' questions about the risks future missions could pose. Astronauts in orbit are still somewhat protected from the worst of the harmful radiation that fills outer space. And returning to Earth isn't quite the same as landing in the reduced gravity of the moon or Mars for a surface stay.

But still, it's better than nothing, Bailey said. "I think really what the ISS represents is helping us to establish a baseline that isn't on Earth." And with Koch's experience included, it will be a more inclusive baseline than it has been in the past, she added.

"It really is an important step that we're going to have a woman up there for nearly as long as Scott Kelly was."