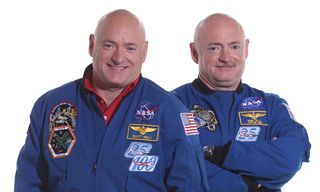 Scott Kelly (left) spent a year in space while his identical twin Mark (right) stayed on Earth as a control subject. Researchers are looking at the effects of space travel on the human body, as part of the NASA Twins Study.
(Image: © NASA)

Kelly and cosmonaut Mikhail Kornienko flew the first-ever yearlong mission aboard the International Space Station (ISS), wrapping up the flight with a touchdown on the steppes of Kazakhstan last March. The goal of the project — which is ongoing, in the data-analysis phase — is to gauge the physiological and psychological impacts of long-duration spaceflight, to help prepare for crewed missions to Mars and other distant destinations.

Multiple research teams are working to suss out those changes, as part of the NASA Twins Study. And the early results — which scientists detailed last week at the NASA Human Research Program’s annual "Investigators’ Workshop" in Galveston, Texas — have already highlighted some interesting developments.

For example, one team found that the telomeres — the regions at the ends of chromosomes — in Scott Kelly's white blood cells got longer during the mission. Telomeres help protect chromosomes from deterioration, and they get shorter over the decades as people age.

Scott's telomere lengthening "could be linked to increased exercise and reduced caloric intake during the mission," NASA officials wrote in a description of the newly announced findings.

"However, upon his return to Earth, they began to shorten again," the officials added. "Interestingly, telomerase activity (the enzyme that repairs the telomeres and lengthens them) increased in both twins in November, which may be related to a significant, stressful family event happening around that time."

Another research team found an apparent decrease in bone formation during the second half of Scott's space mission, and another group identified a slight decrease in cognitive ability (thinking speed and accuracy) shortly after he touched down. However, this latter trend is not substantial enough to suggest that the performance of Mars-bound astronauts will be appreciably affected, NASA officials said.

In addition, whole-genome sequencing of Mark and Scott revealed that both twins have hundreds of unique genetic mutations.

"RNA (transcriptome) sequencing showed more than 200,000 RNA molecules that were expressed differently between the twins," NASA officials wrote. Researchers "will look closer to see if a 'space gene' could have been activated while Scott was in space," the officials added.

All of these results are preliminary; the Twins Study scientists will aim to produce a "joint summary publication" later this year, NASA officials said. The researchers will also publish papers about their findings in scientific journals.