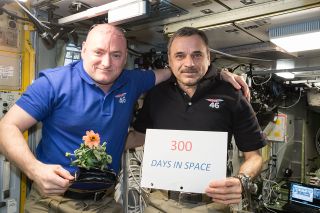 One-year mission crewmembers Scott Kelly of NASA (left) and Mikhail Kornienko of Roscosmos (right) celebrated their 300th consecutive day in space on Jan. 21, 2016. The pair will land on Tuesday (March 1) after 340 days aboard the International Space Station.
(Image: © NASA)

Five thousand four hundred forty. That is how many times NASA astronaut Scott Kelly and Russian cosmonaut Mikhail Kornienko circled the Earth during their record-setting yearlong mission on board the International Space Station.

Kelly and Kornienko launched in March 2015 and are set to return to Earth Tuesday night (March 1), landing with cosmonaut Sergey Volkov on the snow-covered steppe of Kazakhstan aboard Russia's Soyuz TMA-18M spacecraft. Their touchdown, expected at about 11:25 p.m. EST (0425 GMT or 10:25 a.m. local time on March 2), will bring to an end Kelly and Kornienko's 340-day expedition off the planet. You can watch the landing live online courtesy of NASA TV.

Circling the planet every 90 minutes, they witnessed 10,944 sunrises and sunsets, NASA officials said — 16 each day.

"I've been up here for a really long time, and sometimes, when I think about it, I feel like I've lived my whole life up here," Kelly said in a recent media interview.

During their time on the space station, Kelly and Kornienko served with four crews: Expeditions 43, 44, 45 and 46.

"My friend Misha [Mikhail] and I have been up here for a really, really long time, and recently, we have been joking with each other that we'll be saying something like, 'We did it!' or 'We made it!'" Kelly said during a change-of-command ceremony on Monday (Feb. 29). "But we both recognize that this is a lot more about teamwork and all the people that it takes to put these missions together to be successful than it is about us."

"A really smart person said to me one time, 'Teamwork makes the dream work in spaceflight,' and spaceflight is the biggest team sport there is," he added.

Together with their fellow station residents, Kelly and Kornienko participated in 400 research investigations — including studying 20 black mice as part of the Rodent Research Facility. And Kelly collected medical samples and took measurements to support a first-of-its-kind study of twins — together with his brother Mark Kelly on the ground.

During their stay, Kelly and Kornienko saw and assisted with the arrival and departure of nine visiting vehicles.

Three Russian Soyuz spacecraft brought crewmembers to and from the station. In addition, six international cargo freighters brought supplies to the outpost, including three Russian Progress vehicles, one Japanese H-II Transfer Vehicle (HTV), one U.S. Orbital ATK Cygnus spacecraft and one SpaceX Dragon spacecraft. (Two additional launches, one Progress and one Dragon, failed while Kelly and Kornienko were on the station.)

Both yearlong crewmembers also conducted spacewalks. Kornienko ventured outside once to inspect the exterior of the station's Russian segment and retrieve a science experiment, logging 5 hours and 31 minutes on EVA (extravehicular activity).

Kelly performed three spacewalks to install a cover over the Alpha Magnetic Spectrometer, a high-energy particle detector; restore the station's coolant system to its original configuration; and release the mobile transporter railcar after it became stuck. In total, he tallied 18 hours and 20 minutes on EVA.

Pictures worth a thousand views

Over the course of his 340 days, Kelly posted more than 1,000 photographs — 713 on Instagram alone — of the Earth below and his and his crewmates' activities on the space station.

"I have taken a lot of pictures because I have been up here for a long time," Kelly said in an inflight news conference. "Actually, numbers wise, I don't think I have taken that much compared to other crewmembers we have had up here. But I have definitely taken some good ones and some memorable ones."

Among the images he shared with his more than 900,000 Twitter followers were sunrises and sunsets, auroras, the moon, desert dunes and snowy mountain caps.

When they land Tuesday, Kelly and Kornienko will have each added 340 days to their total time in space.

For Kornienko, who had logged 176 days on a prior space station stay, that will bring his career tally to 516 days, ranking him 18th on the worldwide list of explorers by time spent in space.

Kelly will come in one spot above him, at 17, with 520 days, adding to his 180 days accumulated on two space shuttle missions and a previous space station expedition. In terms of American records, that will make Kelly the record holder for the most time in space and the longest single mission by an American astronaut.

Editor's note: This story was updated at 4:50 p.m. ET to correct the rankings of Kelly and Kornienko on the worldwide list of space travelers.