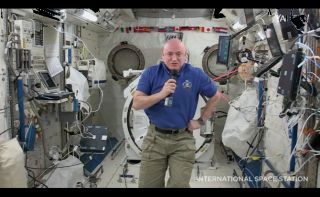 What's it like to live in space? It's a question that never seems to get old, as demonstrated in a series of interviews this week with astronaut Scott Kelly, who is spending a year aboard the International Space Station.

TV interviewers Larry King, host of the show "Larry King Now," and Katie Couric, a global news anchor for Yahoo, both spoke with Kelly this week, and both wanted to know the same thing: What's a normal day like in space? For people on the ground, there seems to be a persistent fascination with the mundane details of space life, such as how astronauts wash their clothes (they don't), what they do for fun (watch TV and read books), and how well they get along with the other crewmembers (very well). The full interviews can be seen in the video above.

Kelly is one of two participants in NASA's One-Year Mission, the first instance of American astronauts spending almost an entire calendar year in orbit. The mission, which is nearing its midpoint, is meant to test the effects of long-term spaceflight on the human body — information that will prove crucial if humanity ever wants to make the journey to Mars. [The Human Body in Space: 6 Weird Facts]

"What do you do all day long, Scott? Can you give us sort of the typical 'Day in the Life' on the International Space Station?" Couric asked Kelly when they spoke via satellite yesterday (Aug. 19).

"Sometimes you're fixing things," Kelly said. "The carbon-dioxide removal system was a piece of hardware we had worked on a few months ago that was pretty extensive. On Monday, we have a Japanese cargo ship coming, so we'll be grabbing that.  So it's a combination of science, maintenance and general housekeeping. And then occasionally robotics activities or a spacewalk you might get to do."

Both Couric and King asked Kelly about how he unwinds from all that work. Kelly said he and the other five crewmembers typically get together and watch a movie on the weekends. Meanwhile, Kelly said he and NASA astronaut Kjell Lindgren are re-watching the TV series "Breaking Bad," and have introduced Japanese astronaut Kimiya Yui to the show as well.

Couric also mentioned that the actress, Julia Louis-Dreyfus, tweeted at Kelly and asked if he was watching her show, "Veep," on HBO. Kelly said he liked the show very much, but was not watching it on the station. However, the station is apparently carrying every season of "Seinfeld," (in which Dreyfus was a main character), which Kelly said he has watched.

And what about even more mundane activities, like doing laundry?

"So, we don't do laundry because that requires a lot of water and water's at a premium up here. Plus, it'd be pretty complicated, I think, to make a space washer, although I guess you could do it," Kelly replied. "So we generally throw our clothes out. I think I've been wearing this pair of pants for about two months. I won't tell you how long I've been wearing the other things," he joked, to which Couric laughed and replied, "Thank you."

Kelly also told Couric that he seems to dream more while he's in orbit. He'd been asked about space dreaming while on previous missions, and at the beginning of the current mission he started writing his dreams down, but stopped because it took too much time, he said.

"It seems like in the beginning of my flight the space dreams were rare. And now, almost 150 days into it, the Earth dreams are more of the rare ones," he said.

Astronauts have embarked on incredible adventures, like walking on the moon or repairing the Hubble Space Telescope, but even the mundane details of life in space prove captivating  to people on the ground, who can only dream about what it's like up there.