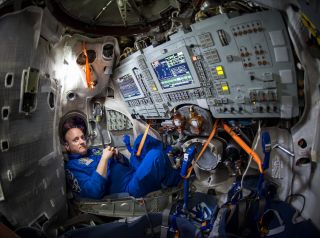 NASA's Scott Kelly prepares to fly up to the International Space Station for a yearlong mission.
(Image: © NASA/Bill Ingalls)

An American astronaut is about to embark on a mother of a space mission.

NASA astronaut Scott Kelly is counting down to launch to the International Space Station Friday (March 27) for a yearlong mission that will test his endurance like never before. Usually, space station missions last about six months, so Kelly's one-year mission will present a unique set of challenges for the astronaut.

Russian cosmonaut Mikhail Kornienko will accompany Kelly for the duration of the one-year mission. They are both scheduled to fly up to the station Friday aboard a Russian Soyuz spacecraft with cosmonaut Gennady Padalka, who will fly back to Earth after about six months.

Kelly was announced as NASA's choice for the one-year space mission in 2012, but it won't be his first time in space. The veteran was originally selected as an astronaut in 1996 after serving in the U.S. Navy. Since joining the space agency, Kelly has flown to orbit three times, racking up more than 180 days in space, according to NASA.

He spent about six months on the orbiting outpost from 2010 to 2011, but this flight will be much longer than any of his previous space shuttle or station missions.

Kelly had to do more than physically train before his mission. He needed to make sure that everything in his life was set before he flew off planet for a full year.

"I have a 20-year-old that lives here and goes to college, and I've got to make sure that she's got everything that she needs to be able to take care of herself if she has any kind of problems," Kelly said. "I've got to line up people to be there for her to help her with things. … Those are the kind of things I think about."

Kelly's twin brother Mark Kelly, himself a former NASA astronaut, will participate in experiments on the ground to help scientists learn more about how Scott might be changing in orbit.

NASA scientists are hoping data collected during the yearlong mission will reveal how long-term stints in space can change the human body. Doctors and researchers have a lot of information about how bodies behave during six months in microgravity, but it isn't yet clear what will happen after one year in space.

Scientists think this kind of research is particularly important because it could help pave the way for crewed missions to Mars. Going to the Red Planet takes a fair amount of time, so learning exactly how to help protect against any ill effects astronauts might experience on the way there could be beneficial, NASA said.

"What makes this exciting for me, this one-year flight is about the science and everything we're going to learn from expanding the envelope on the space station greater than what we've currently done," Kelly said during a news conference hosted by UNESCO — the United Nations Educational, Scientific and Cultural Organization — in December 2014.

"If we're ever going to go to Mars someday, the International Space Station is really a great platform to learn much more about having people live and work in space for longer durations."