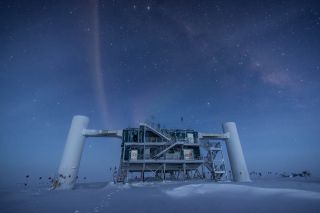 IceCube Laboratory at the South Pole

The IceCube Laboratory at the Amundsen-Scott South Pole Station in Antarctica is the world's largest neutrino detector. Its computers collect raw data on neutrino activity from sensors in the ice that look for light emitted when neutrinos strike.

In this artist's illustration, based on a real image of the IceCube lab at the South Pole, a distant source emits neutrinos that are detected below the ice by IceCube sensors.

This infographic explains the goal and function of the IceCube Neutrino Observatory at the Amundsen-Scott South Pole Station in Antarctica.

This graphic depicts the IceCube Neutrino Observatory's sensors, which are distributed over a volume of 1 cubic kilometer of clear Antarctic ice. Under the ice, 5,160 DOM sensors operate at depths between 1,450 and 2,450 meters. The observatory includes the densely instrumented subdetector DeepCore and a surface air shower array, called IceTop.

A digital optical module (DOM) being lowered into the hole of an IceCube Neutrino Observatory string at the Amundsen-Scott South Pole Station in Antarctica. The IceCube detector consists of 86 strings of DOMs -- which look for light when neutrinos strike the ice – vertically spaced about 17 meters apart.

This illustration shows how muon neutrinos can arrive at the IceCube detector via different paths through the Earth. Neutrinos with higher energies and with incoming directions closer to the North Pole are more likely to interact with matter on their way through Earth.

In this illustration, a neutrino has interacted with a molecule of ice, producing a secondary particle—a muon—that moves at relativistic speed in the ice, leaving a trace of blue light behind it.

This is the high-energy neutrino detected by IceCube on Sept. 22, 2017. The display shows a muon, created by the interaction of a neutrino with the ice very close to IceCube, which leaves a track of light while crossing the detector. The light collected by each sensor is shown with a colored sphere. The color gradient, from red to green/blue, shows the time sequence.

An artist's illustration of a blazar like the one recently found to be accelerating neutrinos and cosmic rays to tremendous speeds. The supermassive black hole at the center of the accretion disk sends a narrow high-energy jet of matter into space, perpendicular to the disk.

Blazar in the Sky

Blazars are active galaxies with one of their powerful jets of material pointed at Earth. In this artist's illustration, a blazar is releasing neutrinos and gamma rays, which can be detected by the IceCube Neutrino Observatory as well as earthbound and space telescopes.