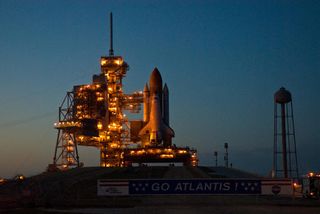 Lights covering the fixed service structure on Launch Pad 39A cast their glow over space shuttle Atlantis poised for May 2009 launch toward the Hubble Space Telescope on the STS-125 mission.
(Image: © NASA/Kim Shiflett.)

CAPECANAVERAL, Fla. - NASA?s chances to launch the space shuttle Atlantis to the Hubble Space Telescope on Monday just got better.

Commandedby veteran shuttle astronaut Scott Altman, Atlantis is poised to fly an11-day mission to Hubble to perform the fifth and final service call on the19-year-old space telescope. NASA has also primed the shuttle Endeavour to serveas a rescue ship if Atlantis is damaged beyond repair and its crew needs tobe rescued in space.

The astronautsplan to performa five-spacewalk marathon to install two new cameras and repair two ailinginstruments that were never built to be fixed in space. They will also giveHubble a much-needed maintenance overhaul to replace old batteries, brokengyroscopes and other gear.

If all goeswell, the mission will extend Hubble?s life through at least 2014. The flighthas been delayed since last fall when a part broke unexpectedly aboard Hubble. Altmanand his crew will replace that faulty part during their mission.

About theonly concerns on launch day are the slight chance of thick clouds nearby, whichcould trigger lighting during liftoff, and possible rain showers at anemergency landing strip in Spain. The landing strip is the only overseas runwayavailable if Atlantis has to make an emergency descent just after liftoff.

Atlantishas a 62-minute launch opportunity on Monday, longer than the typical 10-minutewindows for flights to the International Space Station because it is headed forHubble, NASA said.

NASA hasthree tries to launch Atlantis, one each day through Wednesday, before standingdown due to a previously scheduled military operation at the nearby CapeCanaveral Air Force Station. If Atlantis does not launch by May 13, NASA wouldwait out the military operation and rechargethe new batteries for Hubble before trying again on May 22.

Today,shuttle technicians are installing a pair of experiments in Atlantis? middeckand plan to retract the shroud-like Rotating Service Structure that hasprotected the spacecraft from weather at the launch pad.