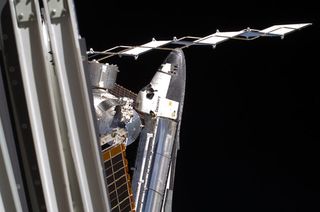 Space shuttle Discovery is seen docked to the International Space Station is featured in this image photographed by one of the STS-119 crewmembers during the mission's first spacewalk on March 19, 2009.
(Image: © NASA)

Astronautsaboard the International Space Station are packing up their spacecraftWednesday as the shuttle Discovery prepares to head home after delivering newsolar wings to the outpost.

?We leavewith a sense of accomplishment,? Discovery skipper Lee Archambault radioedMission Control late Tuesday. ?It?s been a great docked timeframe and we lookforward to what?s next.?

If all goeswell, Discovery?s seven astronauts will get the glimpse of their orbitalhandiwork later this afternoon, when they undock from the space station atabout 3:53 p.m. EDT (1953 GMT). Shuttle pilot Dominic ?Tony? Antonelli will beat the helm to guide Discovery in a victory lap while his crewmates snapphotographs.

Theastronauts delivered the space station?s fourthset of solar arrays, anchoring their 16-ton girder support to the outpost?sstarboard side. With the addition, the station now has eight solar wings in all? two per array - with four wings on each side.

?I think Ishould have time to enjoy the view if everything is working correctly,? Antonellitold reporters before flight. ?I?ll be right there at the window when thathappens, so I?m looking forward to that.?

?We want tothank you for bringing the space station up to full power,? Mission Controltold the astronauts Tuesday.

Archambaultand his crew launched March 15 on a 13-day mission todeliver the solar wings and a critical replacement part for the station?surine recycling system to prime the station to support more science and largercrews. Both systems appear to be working well, and the astronauts will collectabout four liters of water samples recycled through the urine processor laterfor the trip home.

Threespacewalks were performed by the astronauts, who spokewith U.S. President Barack Obama about their mission on Tuesday.They are expected to shut the hatches between Discovery and the space stationat about 12:53 p.m. EDT (1653 GMT).

?I?d like tosay that the crew of Discovery were the best houseguests we?ve ever had,? thestation?s Expedition 18 commander Michael Fincke told Mission Control.?Expedition 18 is very thankful to this great crew.?

The shuttlebrought up Japanese astronaut Koichi Wakata, Japan?s first long-term residentof the station, to join the Expedition 18 crew. Wakata replaced NASA astronautSandra Magnus, who is returning to Earth aboard Discovery after living in spacefor four months. He will join Fincke and Russian cosmonaut Yury Lonchakov forabout a week and then stay aboard to serve aboard the next station crew, whichis due to arrive on Saturday.

Wakata?snext crewmates, Expedition 19 commander Gennady Padalka of Russia and NASAastronaut Michael Barratt, are due to launch Thursday aboard a Russian Soyuzspacecraft with Americanbillionaire Charles Simonyi, who is paying about $35 million for his secondtrip into space.

The newstation crew is due to arrive at the space station on Saturday a few hoursbefore Discovery is slated to land in Florida.