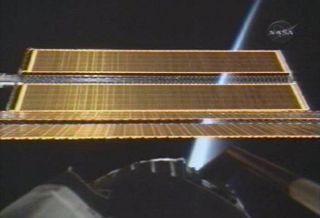 Spanningthe length of a football field (including the end zones) and weighingapproximately the same as a loaded space shuttle orbiter, the InternationalSpace Station's (ISS) integrated truss, or backbone, was completed in orbitthis week after nine years of assembly.

"We'rethe largestspace structure in all of history and it is really amazing to beon-board," exclaimed ISS Expedition 18 commander Mike Fincke on themorning after the final piece of the truss was attached.

The356-foot, girder-like truss supports the station's living modules andlaboratories, as well as eight 115-foot solar array wings that generateas much electricity as would be needed to power 42 2,800 square-foot homes.

"It isjust a remarkable accomplishment for the NASA team, as well as for Boeing,which designed and built this integrated truss assembly," commented DanHartman, NASA's manager for the integration and operations of the spacestation.

Elevensegments were launched by eight space shuttle missions to assemble the truss.Numbered in ascending order outward to the port (P) and starboard (S) sides,the central element, the 44-foot S0, launched in April 2002. (It was precededto orbit by the Z1 and P6 truss segments, as the latter included a set of solararray wings that was needed to provide power during the early stages of stationassembly).

The P1 andS1 thermal radiator trusses, located to either side of the S0, were launched inOctober and November 2002 respectively. The 45-foot segments support coolingtowers used to reject heat from the station.

Next inline, the joint 44-foot P3/P4 and the mirror S3/S4 each include a set of solararray wings, a radiator, and a rotary joint enabling the arrays to track thesun. Delayed by the loss of space shuttle Columbia in February 2003, the P3 andP4 segments were added in September 2006 and, after the truss' electricalsystem was reconfigured by spacewalkers, the S3 and S4 were installed in June 2007.

(P2 and S2trusses had been planned but were canceled during a redesign of the station.)

Thesquare-shaped, 11-foot P5 and S5 segments, which were launched in December 2006and August 2007 serve to connect the P6 and S6 segments to either end of thetruss while separating the P4/S4 and P6/S6 solar arrays.

Capping theends of the truss are the P6 and S6. First launched in November 2000, P6 wasrepositioned from its temporary perch atop the Z1 truss to the end of the P5 inOctober 2007. Its twin, the 45 foot long S6 truss segment was launchedon March 15 of this year.

The S6truss segment was maneuveredinto place using the space station's robotic arm, which itself wasmoved into position along a cart and track system that runs most of the lengthof the truss.

SpacewalkersSteve Swanson and Ricky Arnold, who as part of the STS-119 mission launchedwith the S6 aboard shuttle Discovery, oversaw the installation from outside theISS, bolting S6 to S5, as well as releasing restraints that held the segment'ssolar array wings and radiators for the ride to orbit.

"Welcomeaboard, back on-board the space station, it's a lot bigger than when you leftit," Fincke said, greeting the two astronauts at the end of their March 19outing.

The S6truss held the record for the longest time on the ground by any ISS element,waiting to launch since 2002. One of its two Lockheed Martin-developed arrayshad been folded and packed for eight years, the other for just six. There wasconcern, based on earlier arrays, that the panels might stick.

Applyinglessons learned from earlier deploys, the arrays were given time to"bake" in the sun before commanding their full extension.

"Todaywe brought up our fourth and final solar array and it was absolutelybeautiful," described Fincke. "It's just really amazing. We did itvery slowly, this was our fourth and last one. The first couple of ones gave ussome trouble, we learned from that and made it very smoothly."

With alleight solar arrays extended, 262,400 solar cells now span a combined surfacearea of an acre. Each cell produces about one watt of power, which translatesto a potential output 32.8 kilowatts for each illuminated wing.

"Fullpower!" announced Lee Archambault, commander of STS-119, and whose crewexecuted the deploy.

With thelast segment in place and its wings unfurled, the challenge that was space stationassembly is coming to an end.

"Thesolar array deploy was probably our biggest hurdle we [thought] we had in frontof us," said Hartman. "There are plenty of challenges out there forus. I think we will gain new understandings of how to support a crew of six onthe International Space Station, logistically and operationally, so thechallenge today was the solar array, I'm sure there will be some in the future.But I think we'll be up to it."