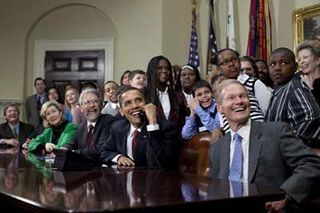 ?The first thing we want to do is just to let you know howproud we are of you,? the president told the spaceflyers. ?We are extremelyexcited about the project that you?re doing.?

The 10 astronauts aboard the docked Discovery and spacestation have spent the last week installingnew solar arrays to complete the outpost?s power grid and metallicbackbone, with the shuttle crew set to depart on Wednesday. President Obamacalled them from the Roosevelt Room in the White House and said their efforts arevery timely for people back on Earth and the U.S.

?We?re investing, back here on the ground, in a whole arrayof solar and other renewable energy products, so to find out that you?re doingthis up at the space station is particularly exciting,? the president said.

While he was proud of the American astronauts aboard thestation and shuttle, the president said he was encouraged by the feat ofinternational cooperation behind thespace station and its multi-national crew, which now includes astronautsfrom the U.S., Russia and Japan.

?This really symbolizes the future of the scientificdevelopment of the world and I?m just happy to be part of it,? said Japaneseastronaut Koichi Wakata, Japan?sfirst long-term resident of the space station who arrived aboard Discovery.

President Obama said he was especially pleased to speak tothe spaceflyers since one of them, NASA astronaut Sandra Magnus, was fromBellwood in his state of Illinois. He asked Magnus, who is finishing afour-month mission aboard the station, if she ever felt tempted to cut her longhair, which billowed out around her in weightlessness.

?I think ideally a short haircut is the way to go, butfrankly on me it wouldn?t be so nice, so I kept it long,? Magnus answered.

?I think it?s a real fashion statement,? the president said.

President Obama was joined by Congressional leaders andschoolchildren as he spoke to Discovery and station astronauts. At times hetook questions from the students for the astronauts on subjects ranging fromhow many stars they could see in space to their daily menu and exercise plans.

Shuttle skipper Lee Archambault said he and his crew werehonored to speak with the president, while station commander Michael Finckesaid the space station has been a tangible example of internationalcooperation.

?It?s pretty impressive what human beings can do when worktogether constructively and not destructively, and that?s what our mission isat the International Space Station,? Fincke said. ?Thanks for flying with us.?

Discovery and station astronauts plan to discusstheir 13-day mission to deliver solar arrays and a new crewmember to thestation with reporters later today. They will also move some cargo betweentheir two ships before settling into some free time before they head home.

?It?s important for us to rest up, the orbiter crew [in] particular,since in just a few days from now they?re going to have to successfully executea re-entry and landing,? Kwatsi Alibaruho, NASA?s lead station flight directorfor the flight, told reporters late Monday from Houston. ?They?ve had a lot oftime off coming to them.?

Discovery will undock from the station Wednesday at 3:53p.m. EDT (1953 GMT), just one day before a Russian Soyuz spacecraft is poisedto blast off from the Central Asian spaceport of Baikonor Cosmodrome with a newcrew and Americanbillionaire Charles Simonyi - who is paying more than $30 million for hissecond trip to space. The Soyuz will arrive at the space station on Saturday,the same day Discovery is due to land in Florida.

Discovery?s crew performed three spacewalks to install thestation?s fourth and final set of solar wings to complete the space station?spower grid. The arrays are moored to a 16-ton girder that, when mounted to thestarboard edge of the station, completed the orbiting lab?s backbone-like maintruss. After more than a decade of construction, the station is now 81 percentcomplete, longer than a football field and weighs nearly 1 million pounds.

The shuttle astronauts also delivered a spare part for thespace station?s urine recycler, which filters astronaut urine back into purewater for drinking, food preparation, bathing and other uses. The recyclingsystem had been broken since last December, but appears to be working wellafter the repairs.

?Overall we?re absolutely thrilled and we?re very happy thatwe were able to accomplish what we did,? Alibaruho said. ?We certainlyaccomplished our highest priority objectives, and certainly the ones that wewere most concerned about were executed flawlessly without problems.?