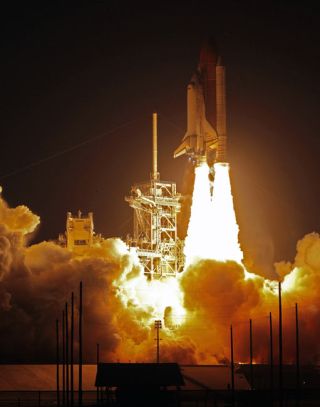 Space shuttle Discovery roars off Launch Pad 39A on the STS-119 mission atop twin towers of fire that light up the sky after sunset at NASA's Kennedy Space Center in Florida. Liftoff was on time at 7:43 p.m. EDT on March 15, 2009.
(Image: © NASA/Scott Andrews.)

Koichi Wakata, a veteran spaceflyer with the JapanAerospace Exploration Agency (JAXA), is riding toward his new orbital home for the next three months, where he willserve as an Expedition 18 flight engineer.

"This mission is a giant leap for the Japanesemanned space activity program," JAXA vice president Yukihide Hayashi saidthrough a translator at briefing here at NASA?s Kennedy Space Center afterlaunch. "It will accumulate valuable knowledge and experience for thefuture Japanese space and aviation program."

Wakata was one of seven astronauts, led by commander LeeArchambault, to launch aboard Discovery's STS-119 mission tonight. The spacecraft lifted off in a purple twilight sky at 7:43 p.m.EDT (2343 GMT) from the seaside pad here.

"I've seen a lot of launches?this was the mostvisually beautiful launch I have ever seen," said NASA shuttle launchdirector Mike Leinbach. "It was just spectacular. When the orbiter and thetank and boosters got up into the sunlight, that had just set about 10 minutesprior, it was just gorgeous."

The launch went smoothly, in contrast to a series ofglitches that have kept Discovery grounded for more than a month past itsoriginal launch date.

"I think when we work a little extra hard to get tothe launch I think it's even a little sweeter when the launch actuallyoccurs," said Bill Gerstenmaier, NASA?s associate administrator for spaceoperations. "I think this just worked out really wonderful."

A small fruit bat that fell asleep on the side of the shuttle'sexternal tank this morning apparently held on throughout Discovery's liftoff.

Discovery is carrying a huge girder to complete the spacestation's backbone truss, and the final set of solar arrays to power theorbital outpost. After dropping off Wakata at the station, Discovery will ferryhis predecessor, NASA astronaut Sandra Magnus, home.

The nation of Japan will be following this missionclosely, eager for their countryman to live onboard the space station and useits largest laboratory, the Japanese-built Kibo module, which was installedlast May.