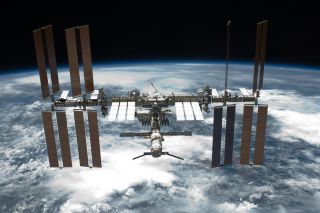 Bacteria on the International Space Station are evolving and changing in their strange orbital environment -- but according to a new study, they don't seem to be any more dangerous to humans.

That's good news for astronauts, as some previous research suggested that space travel might make certain microbes mutate into strains that are more harmful to people .

"There has been a lot of speculation about radiation, microgravity and the lack of ventilation and how that might affect living organisms, including bacteria," lead study author Erica Hartmann, a biological design professor at Northwestern University, said in a statement. "These are stressful, harsh conditions," leading researchers to wonder if space travel would increase the odds that bacteria would evolve into so-called superbugs to survive.

Based on the new study, published today (Jan. 8) in the journal mSystems, “the answer appears to be 'no,'" Hartmann said.

In the study, researchers analyzed DNA from two kinds of bacteria that had taken a trip to the ISS: Staphylococcus aureus (which is found on skin and causes staph infections) and Bacillus cereus (which is present in digestive systems and soil and usually harmless). Both microbes were collected from the ambient environment of the space station and probably hitched a ride to space on the skin of astronauts or inside their bodies. The results revealed that while the returned bacteria had mutated differently than their Earthbound counterparts, they hadn't developed any of the obvious genetic traits of superbugs. (Superbugs are bacteria that have become resistant to antibiotics.) [Over Earth: Day & Night from ISS]

On Earth, the researchers said, bacteria routinely fall away from the human bodies they prefer to inhabit and undergo changes to adapt to nonliving surfaces. But researchers were especially concerned that the close quarters of spacecraft, where humans and bacteria share the same air and small spaces for months on end, might produce dangerous changes.

It seems, however, that while the bacteria did change themselves to adapt to space, those changes didn't produce any abnormalities that would make them produce diseases that would be more infectious or difficult to treat.

This is good news for long-term spaceflight. While NASA's rigorous quarantine procedures before launches have made infectious diseases in space exceedingly rare, the prospect of an outbreak in a sealed spacecraft speeding toward Mars remains alarming. So far, though, it seems that nothing about the space environment itself is working to make that bacterial risk any more dire — even if there are other health issues to worry about.