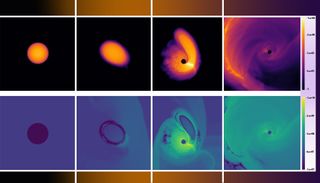 Supercomputer simulations show what it would look like if a zombie star whirled around a black hole and reignited. The top images show density and the bottom show temperature.
(Image: © Lawrence Livermore National Laboratory)

Adding a cosmic "Walking Dead" twist to the most morbid of all space objects, scientists have found that some black holes could bring dead "zombie" stars back to life — and then destroy them.

Black holes are invisible "objects" in space where the gravity is so strong that it sucks everything into it, even light. All of the black holes that astronomers have found so far are either superbig — as in hundreds of thousands and even billions of times the mass of our sun — or on the smallish side, as in, say, less than 100 times the mass of our sun. Astronomers haven't spotted any of these matter-sucking beasts in the middle range yet, but that doesn't mean they don't exist.

Scientists at Lawrence Livermore National Laboratory in California suspect that midsize black holes might be just the right size to provide enough gravitational force to reignite a dead white dwarf star — the stellar corpse of a star that's about the mass of the sun and that's used up its nuclear fuel. [Spaced Out! 101 Astronomy Images That Will Blow Your Mind]

To test their idea, the team members ran supercomputer simulations of dozens of different close-encounter scenarios between these dead stars and midsize black holes. Every time a white dwarf got close to the Goldilocks black hole, the star reignited. The gravitational force from the black hole would cause the stellar material to fuse into varying amounts of calcium and iron, producing more fusion and iron as the star got closer to the black hole. This so-called nucleosynthesis process would reignite the once-dead star.

The team also found that the star's revival would create powerful electromagnetic waves that could be picked up by detectors in near-Earth orbit — meaning we might be able to "see" where it happened and find the medium-size black hole that gave it a second life.

"If the stars align, so to speak, a zombie star could serve as a homing beacon for a never-before-detected class of black holes," Peter Anninos, physicist and lead author on the study, said in a statement.

But the resurrected star wouldn't stay bright forever. The necromancing black hole would bring the star back to life — only to rip it apart later.

"As [the spherical star] approaches the black hole, tidal forces begin to compress the star in a direction perpendicular to the orbital plane, reigniting it," physicist Rob Hoffman, co-author on the study, said in the statement. "But within the orbital plane, these gravitational forces stretch the star and tear it apart.”

The team published its findings in the September issue of The Astrophysical Journal.