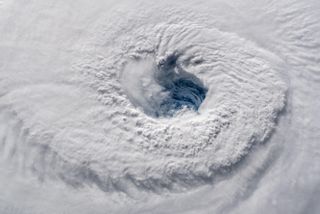 Hurricane Florence's eye is seen from the ISS.
(Image: © A. Gerst/ESA/NASA)

For the first time, researchers have calculated the impact of climate change on a hurricane before the storm is over.

Hurricane Florence, they found, will grow about 50 miles (80 kilometers) larger and will dump 50 percent more rain over a period from Sept. 11 to Sept. 16 than it would have in a world before climate change.

The paper, published online today (Sept. 12), relies on established techniques for studying cyclones, though it has not yet been subject to peer review. Researchers from Stony Brook University forecasted the storm based on existing global conditions. They then did the forecast again using conditions that would have been expected in a climate unchanged by human activity, meaning greenhouse gases, aerosols and other atmospheric metrics were all set to "pre-industrial levels," or those found more than 150 years ago.

"In particular, the air temperature, specific humidity, and sea surface temperature from the observed [real world] conditions are modified to remove climate change effect," they wrote in the new paper. [Photos of the Monster Storm]

More than 1 million people will likely evacuate from the storm's path in the Carolinas and Virginia, according to the New York Times.