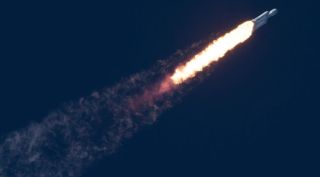 WASHINGTON — SpaceX's first Falcon Heavy launch with a commercial satellite is scheduled to occur around the end of the year, according to customer Arabsat.

The Riyadh, Saudi Arabia-based satellite operator told SpaceNews by email that the launch window for Arabsat 6A is between December and January.

An Air Force Space Command spokesperson told SpaceNews the STP-2 mission is currently scheduled for October. STP-2 was previously up for launch this month, but slipped "due to ongoing SpaceX qualification testing and engineering review by both SpaceX and the Air Force," the spokesperson said.

Following STP-2 and Arabsat-6A, it is unclear when the next Falcon Heavy mission will occur. SpaceX still counts fleet operators Intelsat, Viasat and Inmarsat as Falcon Heavy customers, but none have assigned spacecraft to the rocket.

Intelsat, SpaceX's earliest Falcon Heavy customer, also has a launch option dating back to 2012, but no concrete details such as payload or date.

"We still have the Falcon Heavy agreement but no satellite has been assigned to the vehicle," Intelsat spokesperson Jason Bates said.

Carlsbad, California-based Viasat, in response to SpaceNews inquiries, gave no firm commitment of a Falcon Heavy launch, though the company is still listed on the SpaceX manifest.

"Viasat had a launch contract on the Falcon Heavy   for the ViaSat-2 satellite launch," Viasat said in a statement. "We continue to talk with SpaceX as well as other launch providers for our future launches. As deals are solidified with our launch providers – we'll update the market."