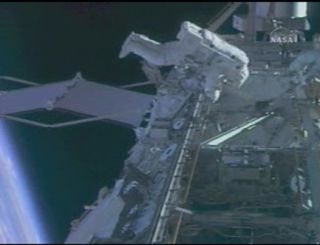 The test,which ended at 12:09 p.m. EDT (1609 GMT) and appeared to go smoothly, is acritical step for mission managers deciding whether the space shuttle Atlantis currentlydocked at the station will depart with its seven-astronaut crew on Tuesdayas planned.

During thetest, ISS flight controllers handed control of the station?s orientation fromthe shuttle Atlantis to the Russian thrusters governed by a navigation andguidance - or terminal - computer inside the orbital laboratory?s Russian-builtsegment.

The Russiannavigation system maintained attitude control of the ISS, and then transferredcontrol of the thrusters to U.S. guidance systems which later shut down thethrusters and brought up U.S. control moment gyroscopes to take over. Monday?stest began at 10:34 a.m. EDT (1434 GMT).

?That?s abig step in our checkout of the computers to make sure everything is working correctly,? ISS flightdirector Holly Ridings said early Monday before the test.

Shuttle andISS mission manager will go over the data from the test and make a finaldecision on whether the Atlantis astronauts will leave Tuesday on schedule or remaindocked an extra day.

Atlantis?STS-117 crew, commanded by veteran astronaut Rick Sturckow, is due to shut thehatch between their shuttle and the ISS at 6:23 p.m. EDT (2223 GMT) today if thestation computer test checks out.

The Russianterminal computer, along with two others and three command and control computers,failedlast week, leaving the station without the use of its primary Elektronoxygen generator and other environmental control systems.

Theshutdown also left the ISS dependent on U.S.-built gyroscopes and thrustersaboard Atlantis for attitude control. By Saturday, however, Russian engineersand cosmonauts revivedall six computers and all environmental systems aside from the Elektronoxygen generator, which is offline as planned while the station draws onsupplies aboard a docked cargo ship, NASA said.