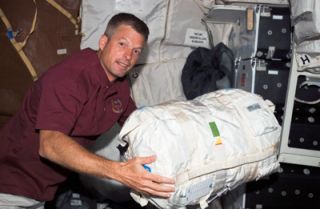 HOUSTON --Seven astronauts aboard NASA’s shuttle Atlantis will pack up theirspacecraft Monday and prepare to leave the International Space Station (ISS)after one final check of the orbital laboratory’s Russian computersystems.

Atlantisand ISS astronauts are hauling the last bits of cargo between their twovehicles while flight controllers on Earth test the outpost’sresuscitated Russian control and navigation computers after theycrashed last week.

The shuttleturned over attitude control to the station’s Russian segment and thrusterscontrolled by the revivednavigation computers after a planned maneuver by Atlantis for a wastewaterdump, NASA said. U.S. navigation control systems also took control of theRussian thrusters as part of the check, the agency added.

“Thatwill finish checking out all the attitude control systems,” lead ISSflight director Kelly Beck said Sunday. “Again, we’re confidentit’s going to work, but it will be a good double-check to make sureeverything is in the proper configuration.”

TheAtlantis and ISS astronauts, meanwhile, are preparing for a planned Tuesdayundocking of the shuttle, and are due to shut the hatches between their twospacecraft at about 6:23 p.m. EDT (2223 GMT) if the Russian attitude controlsystem check goes well. The astronauts are currently slated to undock at about10:40 a.m. EDT (1440 GMT) Tuesday for a planned Thursday landing.

The shuttlecrew is had about a half-day of down time Monday after a busy week of spacestation construction.

Atlantis’STS-117 crew delivered a pair of massive starboard trusses to the station lastweek after a June 10 docking.

Overnight,ISS flight controllers successfully performed initial checks on a massiverotary joint bridging the two new starboard trusses that is designed to rotateoutboard solar arrays so they can continuously face the Sun. Additional teststo check its Sun-tracking capabilities are underway and are expected to endwith the joint running in full operations later today, NASA said.

Atlantisalso ferried NASA astronaut Clayton Anderson to the ISS to join Expedition 15commander Fyodor Yurchikin and flight engineer Oleg Kotov as a member of thestation’s crew.  Anderson is relieving NASA astronaut SunitaWilliams, who has lived aboard the ISS since December 2006 and brokethe world record for the longest-duration spaceflight by a female astronauton Saturday.

“Ijust wanted to make sure we weren’t doing anything that would prevent usfrom dancing,” Williams joked to Mission Control after asking whether anysensitive maneuvers were planned. “Alright, it’s my lastnight!”

LateSunday, after STS-117 spacewalkers completed the fourth and final plannedspacewalk of their 13-day mission, the Atlantis astronauts added their missionpatch alongside those of other past crews that have visited the ISS to abulkhead as part of a station tradition.

The shuttleand ISS crews took some time to celebrate their docked mission with a groupmeal peppered with both U.S. and Russian foods.