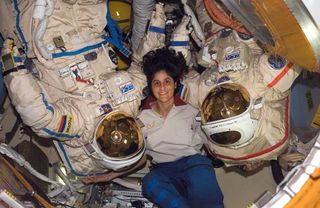 At precisely 1:47 a.m. EDT (0547 GMT), Williams took the all-time title for the longest spaceflight by a female astronaut as she passed the 188-day, four-hour mark in Earth orbit.

"This has been my home. I love living up here," Williams told CBS News earlier this week, adding that the station is great place to work, even if unfinished. "Hopefully, over the past six months, a lot of people have joined me and been able to see that."

Williams' spaceflight surpassed that of fellow NASA astronaut Shannon Lucid, who spent just over 188 days in orbit during a 1996 mission to Russia's Mir Space Station. By coincidence, Williams set the new record on the 44th anniversary of the launch of the first female spaceflyer Valentina Tereshkova, a cosmonaut launched by the former Soviet Union in 1963.

"It's just being in the right place at the right time," Williams told Mission Control this morning. "It's an honor to be up here."

Williams has lived aboard the ISS since December 2006, when she launched spaceward aboard NASA's shuttle Discovery to join the orbital laboratory's Expedition 14 crew. She stayed on in April as part of the station's Expedition 15 crew.

During that time, Williams - a Massachusetts native and diehard Boston Red Sox fan - has ran the Boston Marathon from orbit and performed four spacewalks. With a total time of 29 hours and 17 minutes over four excursions, Williams also holds the record for the most spacewalking time by a female astronaut.

Williams is returning to Earth with Atlantis' STS-117 crew after turning her ISS duties over to NASA astronaut Clayton Anderson. That ISS crew handover is among the many tasks on the docket for the STS-117 crew today, mission managers said.

Expedition 15 cosmonauts Fyodor Yurchikhin and Oleg Kotov will likely have a lighter workload aboard the ISS, since they have spent the last few days working long hours with Russian flight controllers on Earth to recover vital computer systems inside the station's Russian-built Zvezda module, NASA said.

"We actually took a look at everything and everything seems to be working," Expedition 15 commander Fyodor Yurchikhin said, as the computer recovery effort continued to make progress this morning.

Since Friday's revival use of the station's Russian control and terminal computers, used to command primary systems and for navigation control, respectively, Russian flight controllers are reactivating some systems that have been offline.

"In the last 24 hours, we've had a lot of successes," Ridings said.

NASA ISS flight director Kelly Beck told SPACE.com Friday that the Atlantis and Expedition 15 crews will spend some of their time transferring items between their two spacecraft as Anderson and Williams swap roles aboard the two vehicles. But the main focus, she added, will be on plans for Sunday.

"Primarily, the crew is going to be preparing themselves for the fourth EVA," Beck said of the final extravehicular activity (EVA) planned for the STS-117 mission during a briefing.

Atlantis astronauts Patrick Forrester and Steven Swanson will perform the spacewalk Sunday to complete some work on the space station's new Starboard 3/Starboard 4 truss segments left over from the last three EVAs, as well as a few tasks currently slated for future spacewalkers, Beck said.

The 10 shuttle and ISS astronauts are also due to speak with reporters during a space-to-ground news conference at about 7:43 p.m. EDT (2343 GMT).

Commanded by veteran spaceflyer Rick Sturckow, the Atlantis crew is flying a 13-day mission to deliver Anderson and new starboard solar arrays and trusses to the ISS.

Anderson launched aboard Atlantis as a mission specialist and has since transitioned to take his post as an Expedition 15 flight engineer and NASA's ISS science officer.

Williams, meanwhile, is now serving as an STS-117 mission specialist for the return trip to Earth. Their crew swap, originally slated to occur on NASA's STS-118 mission in August, was moved up one flight due to launch delays for Atlantis' current flight.