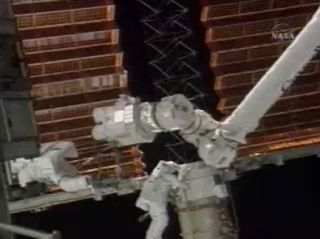 ?Forreasons that are unknown to us at this time, we lost both of those computersand currently we?re in that configuration,? said Mike Suffredini, NASA?s ISSprogram manager, during a briefing here at the space agency?s Johnson SpaceCenter.

Thecomputer failures have left the station without the use of its Russian attitudecontrol thrusters, Elektron oxygen generator and other support equipment,though the ISS has plenty of oxygen supplies and U.S.-built redundancy to makeup for the loss for the time being, Suffredini said.

The station?sthree-astronaut crew and seven visiting shuttle astronauts are not at risk, andhave not lost all vital systems, he added.

?Thelights, the fans and, thank God, the potty, all those things are working,?Suffredini said.

The ISS iscurrently relying on its four U.S. control moment gyroscopes to maintain itsorientation in space, then shifting to thrusters aboard NASA?s shuttle Atlantiswhen the gyroscopes are overwhelmed, or saturated.

Thatdependency is leading mission managers to discuss the possibility of extending Atlantis?13-day mission by a day or so and conserving its supplies where possible,Suffredini said. Atlantis? mission was already extendedtwo days to allow an added spacewalk and the repair of a torn shuttle blanket.

In aworst-case scenario, in which the issue runs beyond current shuttle mission andexceeds the capabilities of the station?s ?U.S. system ability to control the ISS,its three-astronaut crew could return to Earth.

?If we arein that position, we do have the option to depart,? Suffredini said, stressingthat he believes the computer issue will be solved in the next few days. ?I?m notthinking is something that we will not recover from.?

The station?sRussian segment has a network of six primary computers, three for guidance andnavigation and three for command and control, any one of which can handle theduties of its counterparts, Suffredini said, adding that only two were onlineearly Wednesday.

While thecomputers have experienced hiccups in the past, a system-wide reboot typicallysolved the problem, mission managers said.

?Of course,what?s unique is that when the system went to reboot itself, it wasn?t able todo that,? Suffredini said.

On Tuesday,an unexplained glitch hung up the station?s Russian navigation computers asastronauts deployedtwo starboard solar arrays from the end of the station?s new Starboard3/Starboard 4 (S3/S4) truss segments. The glitch kicked off a series ofcomputer errors that included a false fire alarm that sent the ISS crew intoemergency procedures for a brief time.

ISSengineers are studying a number of possible explanations for the computerissues, ranging from electromagnetic interference to the added mass and powersupply delivered in the new S3/S4 trusses and solar arrays, mission managerssaid.

Russianflight controllers plan to dedicate much of Thursday morning, when the ISSflies over Russian ground stations, to working through the computer issues.

Of primaryconcern for ISS flight controllers is the recovery of the Russian attitudecontrol system, which orients the station using thrusters when the outpost?sU.S. gyroscopes are overwhelmed.

The system,Suffredini said, is typically used just after a shuttle docks or undocks fromthe ISS to dampen out the change in momentum. It is also used to move the ISSout of the way of orbital debris, he added.

Russian ISSflight controllers assured the station?s Expedition 15 that everything wasbeing done to root out the issue.

?Definitely,we are going to do everything possible to resolve it,? Russia?s Mission Controltold the ISS crew.