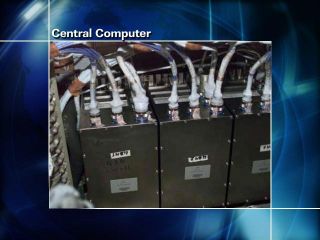 HOUSTON -- TwoRussian cosmonauts and engineers on Earth have made more progress to revive criticalcomputers aboard the International Space Station (ISS), NASA said Saturday.

NASA ISSprogram manager Michael Suffredini said all six computers governing command andnavigation systems for Russian segments of the station are back up and running,including two that were previously thought failed. A test to check whether theycan take control of the space station?s attitude control when needed isforthcoming.

?So whenthat test is complete, we will consider that the computers are up and healthy,?Suffredini said during a mission update here at NASA?s Johnson Space Center.

That testof the station?s navigation system, Suffredini said, is expected to be performedin the next day or so. If successful, ISS flight controllers would not ask to extendthe mission of NASA?s space shuttle Atlantis currently docked at the station,he added.

Atlantis?STS-117 astronaut crew is scheduled to depart the ISS on Tuesday, June 19.But after a meticulous power conservation effort, the astronauts have extendedthe shuttle?s supplies to offer an extra docked day at the ISS if needed.

?Things arelooking up as if Tuesday could be a good day for the shuttle to leave,?Suffredini said.

The spacestation?s Russian-build segments rely on two computer systems, command andnavigation, each consisting of three computers though only one machine, or lane,for each group can provide necessary control over the station?s Russiansystems.

All six ofthe redundant systems shutdown earlier this week, prompting overnight scrambling in Russian MissionControl and long hours for Expedition 15 cosmonauts Fyodor Yurchikhin and OlegKotov aboard the ISS to track the glitch.

The failureleft the ISS without its Russian thrusters, dependent on U.S. control momentgyroscopes to maintain its orientation in space. An oxygen generator, carbondioxide scrubber and other environmental control systems were also offline andtemperatures rose inside the station?s Russian-built Zvezda service modulewhere the computers are located.

?I think wegot a little over 80 degrees at one point in the service module,? Suffredinisaid. ?

U.S.-builtsystems compensated for the loss of some Russian counterparts, though thestation did not lose any lights, fans or communications during the shutdown. Withthe computers?recovery, vital systems were brought back online beginning with the coolingsystem, mission managers said.

ISS cosmonautsset up shunts for each unit to bypass the circuit, reviving all six to lifeover the last two days. The bypassed circuits are redundant due to otherovercurrent protection systems already in place, Suffredini said.

?Oleg andFyodor will get to sleep through the night,? Suffredini said of thehard-working ISS crew. ?That?s actually very significant.?

Engineersbelieve the circuits were tripped due to increased interference, or ?noise,? fromthe station?s plasma environment related to the addition of massive newstarboard trusses and solar arrays.

?Theleading theory today is that it?s from noise caused by the growth of thestation and how the potential changes as we continue to do that,? Suffredinisaid, adding that Russian engineers will determine whether other systems are atrisk as the station?s construction continues.

Meanwhile,aboard Atlantis and the ISS, astronauts spent the day transferring supplies andequipment between the ISS and Atlantis. The shuttle astronauts are gearing upto perform the fourth spacewalk of their planned 13-day mission Sunday.

Commandedby veteran shuttle flyer Rick Sturckow, Atlantis? STS-117 mission delivered anew crewmember and a pair of massive starboardtruss and solar arrays while at the ISS. The shuttle?s seven-astronaut crewis due to land at NASA?s Kennedy Space Center in Florida on June 21.