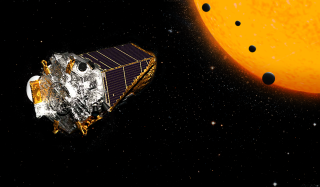 NASA is about to announce some more big alien-planet news.

The agency will hold a news conference Thursday (Dec. 14) at 1 p.m. EST (1800 GMT) to reveal a new discovery made by its prolific Kepler space telescope, which has been searching the heavens for alien worlds since 2009. Space.com will air the briefing live, courtesy of NASA.

"The discovery was made by researchers using machine learning from Google," NASA officials wrote in a media advisory. "Machine learning is an approach to artificial intelligence, and demonstrates new ways of analyzing Kepler data." [7 Ways to Discovery Alien Planets]

The following people will participate in the news conference:

Kepler spots alien worlds by noticing the tiny brightness dips they cause when they cross the face of their host star from the spacecraft's perspective. Kepler is the most accomplished planet hunter in history. It has found more than 2,500 confirmed alien worlds — about 70 percent of all known exoplanets — along with a roughly equal number of "candidates" that await confirmation by follow-up observations or analyses.

The vast majority of these discoveries have come via observations that Kepler made during its original mission, which ran from 2009 to 2013. Study of these data sets is ongoing; over the past few years, researchers have used improved analysis techniques to spot many exoplanets in data that Kepler gathered a half-decade ago or more.

Kepler's first mission, which involved staring continuously at about 150,000 stars, ended in May 2013, when the spacecraft lost its second orientation-maintaining "reaction wheel." But the telescope's handlers soon figured out a way to stabilize Kepler using sunlight pressure. It is now on a second mission, called K2, during which it's hunting for exoplanets on a more limited basis and making a number of other observations.