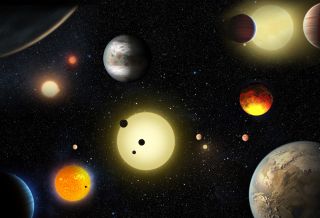 NASA's prolific Kepler Space Telescope has added 1,284 more confirmed exoplanets to its list of discoveries in what scientists called the biggest haul yet. This artist's illustration depicts some of Kepler's notable exoplanet finds over the years.
(Image: © NASA/W. Stenzel)

The number of known alien planets has just gone up by more than 60 percent.

NASA's Kepler space telescope has discovered 1,284 new exoplanets, including nine rocky worlds that might be capable of supporting life as we know it, astronomers announced today (May 10). This is by far the largest haul of alien planets ever unveiled at one time.

The total exoplanet tally now stands at about 3,200, and Kepler has found 2,235 of them, NASA officials said. [1,284 Exoplanets Found: NASA's Kepler Space Telescope Discovery in Pictures]

"We now know that exoplanets are common, most stars in our galaxy have planetary systems and a reasonable fraction of stars in our galaxy have potentially habitable planets," Paul Hertz, Astrophysics Division director at NASA Headquarters in Washington, D.C., said during a news conference today. "Knowing this the first step toward addressing the question, 'Are we alone in the universe?'"

Indeed, data gathered by Kepler and other instruments suggest that about 25 percent of all the "normal" (main-sequence) stars in the Milky Way harbor roughly Earth-size planets in their habitable zones, that just-right range of distances at which liquid water can exist on a world's surface.

"You can see, doing the math, that you're talking about tens of billions of potentially habitable, Earth-sized planets out there in the galaxy," Batalha said during today's new conference.

The $600 million Kepler mission launched in March 2009, tasked with determining how common Earth-like planets are throughout the Milky Way. The observatory finds alien worlds by noticing the tiny brightness dips caused when the planets cross the face of, or transit, their host stars from Kepler's perspective.

Kepler conducted its original planet hunt until May 2013, when the second of the telescope's four orientation-maintaining reaction wheels failed, robbing the observatory of the precise pointing ability needed to spot transiting planets. During this prime mission, Kepler found more than 4,000 planet "candidates" that needed to be confirmed by follow-up work.

Previously, astronomers had usually attempted to validate Kepler finds by observing the candidates using ground-based instruments. But the team behind today's announcement took a statistical approach, devising a confirmation method based on probability. [Gallery: A World of Kepler Planets]

This technique relies on computer simulations to determine how likely it is that a particular brightness dip was caused by a bona fide planet, as opposed to an "imposter" such as a star or brown dwarf. (A brown dwarf is a "failed star," too big to be a planet but too small to undergo nuclear fusion reactions in its interior.)

Any candidate with more than a 99 percent chance of being a real exoplanet was deemed to be validated, researchers said.

The team, led by Tim Morton of Princeton University in New Jersey, applied this statistical method to every one of the candidates spotted during Kepler's original mission. The researchers confirmed 984 previously vetted planets and identified 1,284 new worlds. An additional 1,327 are likely to be planets, whereas 707 are probably imposters, team members said.

About 550 of the newly validated 1,284 are small enough that they could be rocky, scientists said. And nine of those small planets might be able to support life, bringing the total number of confirmed habitable-zone Kepler planets to 21. (An additional 15 or so possibly rocky, habitable-zone Kepler worlds still await confirmation, Batalha said.)

While the sheer number of exoplanets found by Kepler is impressive, mission team members are more interested in understanding the broad outlines of the alien-planet population, Batalha said.

And the Kepler data are allowing scientists to take a good big-picture look at the galaxy's planetary systems. For example, the telescope's observations have revealed many "super-Earths" and "mini-Neptunes" — planets larger than Earth but considerably smaller than the gas giants found in the outer solar system.

"I think one of the biggest things that Kepler has shown us is that there are lots of these planets that have no analog in our solar system," Morton said.

Furthermore, the 1,284 newfound worlds further support what previous Kepler discoveries had revealed: that small, rocky worlds such as Earth are the most common type of planet in the Milky Way, Morton added.

Kepler's original planet hunt may have ended in May 2013, but the observatory is still studying the heavens today. Mission team members figured out how to stabilize the observatory using sunlight pressure and the remaining two reaction wheels, and in 2014, Kepler embarked on a new mission called K2.

The spacecraft continues to hunt for alien planets during the K2 mission, but is also studying other cosmic objects and phenomena such as supernova explosions, comets and asteroids. Kepler has enough fuel on board to continue operating until the middle of 2018, team members have said.