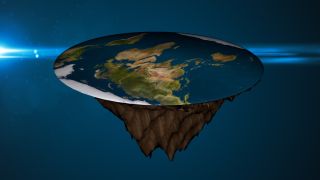 Many flat-Earthers believe the Earth is a disc surrounded by an ice wall.
(Image: © FastMotion/Shutterstock)

A conference aimed at disputing the idea that the world is round just wrapped up in North Carolina.

The first-ever 2017 Flat Earth International Conference (FEIC) was held in Raleigh on Nov. 9 and 10, featuring some of the big names in round-Earth denial. Among the speakers were Darryle Marble, who once took a level on a plane to "prove" the Earth doesn't curve; Mark Sargent, the creator of the Flat Earth Clues YouTube Series, who believes all life is enclosed in a "Truman Show"-like dome structure; and Jeran Campanella, a YouTube and online radio personality, who makes flat-Earth, 9/11 Truther and other conspiracy theory videos. [7 Ways to Prove the Earth Is Round]

The conference was hosted by Kryptoz Media, which produces DVDs and other media arguing that "scientism" is an agenda designed to keep people from God, and the Creation Cosmology Institute, an organization with little online footprint except a now-deleted YouTube channel.

The conference featured talks such as "NASA and Other Space Lies," "Flat Earth with the Scientific Method," "Waking Up to Mainstream Science Lies" and "Testing the Globe." The conference organizer, Kryptoz Media's Robbie Davidson, is a Christian creationist, and that philosophy emerged in sessions such as "Flat Earth & The Bible" and "Exposing Scientism," the latter of which decried evolution and the Big Bang theory of the universe's origin.

Flat-Earthers believe that Earth is not a globe, but a flat plane. Beliefs on how the "true" globe is laid out vary, but many YouTube personalities who push the conspiracy theory say that the planet is a disc surrounded by an ice wall. Flat-Earthers argue that NASA and other scientific agencies digitally fake pictures of the globe from space and that there is a vast conspiracy to keep the truth of the flat Earth from the public.

Recently, flat-Earth believer and rapper B.o.B. tried to crowdfund $1 million via GoFundMe to launch a satellite to see if he could detect for himself the curvature of the Earth. GoFundMe temporarily froze the donation account, but it is now back online, having raised $6,842 from 224 people.

No one knows how many people really subscribe to flat-Earth beliefs. The Flat Earth Society, the oldest organization devoted to the belief, claims 555 members. Marble boasts 22,954 subscribers to his YouTube channel. About 500 people attended the conference in Raleigh, Davidson told Live Science via email.

The next annual Flat Earth International Conference will be held in Denver, from Nov. 15 -16, in 2018. Davidson said he expects up to 1,500 attendees.