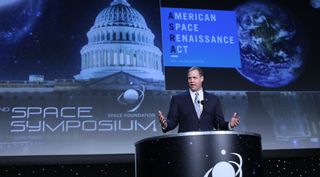 Sen. Patty Murray (D-Wash.) said Oct. 26 she opposed the nomination Rep. Jim Bridenstine (R-Okla.) to be NASA administration, because of his views on climate change and many other issues.
(Image: © Tom Kimmell)

HUNTSVILLE, Ala. — A day after the Senate Commerce Committee announced a confirmation hearing for Rep. Jim Bridenstine's (R-Okla.) nomination to be the next NASA administrator, one senator has announced her opposition to his bid.

In a three-page letter Oct. 26 sent to Sens. John Thune (R-S.D.) and Bill Nelson (D-Fla.), the chairman and ranking member of the commerce committee, Sen. Patty Murray (D-Wash.) said she opposed the nomination based on Bridenstine's past comments on issues ranging from climate change to equal rights.

"Rep. Bridenstine's background makes him an extremely concerning choice to lead this critical agency and its 19,000 diverse employees," Murray, the ranking member of the Senate Health, Education, Labor and Pensions Committee, wrote. "Rep. Bridenstine's denial of climate science and consistent opposition to equal rights for women, immigrants, and gay, lesbian, bisexual, transgender, and queer (LGBTQ) individuals should disqualify him from consideration." [In Photos: Donald Trump and NASA]

Murray, in the letter, cited a number of examples of her concerns, including a one-minute speech Bridenstine gave on the House floor in 2013 questioning global warming. "Given that NASA's fiscal year 2018 budget requested $1.8 billion for Earth-observing and climate science missions," she wrote, "Rep. Bridenstine's failure to accept fundamental scientific truths about Earth's climate make him an ill-suited and dangerous choice to lead the agency."

Her letter also mentioned Bridenstine's positions on other issues, including opposition to same-sex marriage, support for the Trump administration's efforts to enact travel bans on those coming from a number of Muslim-majority nations and a 2013 vote against the reauthorization of the Violence Against Women Act.

The White House announced Bridenstine's nomination to lead NASA Sept. 1. At the time, a few senators, including Nelson and Sen. Marco Rubio (R-Fla), said they had concerns about the nomination, in part because of Bridenstine's lack of a technical background. However, Murray is the first to speak out strongly in opposition to the nomination.

Murray issued the letter a day after the Senate Commerce Committee announced it had scheduled a confirmation hearing for Bridenstine on Nov. 1. That hearing will include nominees for three other non-NASA positions.

They also noted that Bridenstine's views on climate change have changed since the 2013 speech cited by Murray and other critics. Bridenstine acknowledges the existence of global warming and acknowledges that human activities play a role in that.

In an op-ed published by the Orlando Sentinel Oct. 20, Rep. Ed Perlmutter (D-Colo.), who serves on the House Science Committee alongside Bridenstine, endorsed his colleague's nomination to be NASA administrator, despite being from the other major political party. Perlmutter cited Bridenstine's expertise on exploration and commercial space issues, as well as science.

"Jim Bridenstine has a firsthand perspective on the need to better understand our Earth and the behavior of the atmosphere," Perlmutter wrote. "He has a keen awareness of the important Earth science missions NASA is undertaking and wants to continue to advance our understanding of the planet."