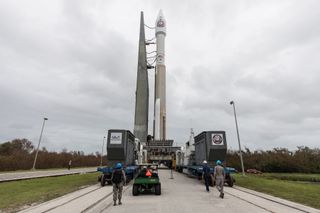 Editor's note: The launch of the NROL-52 spy satellite launch was delayed for the third day in a row today, Oct. 7, this time due to a telemetry transmitter problem on the satellite's Atlas V rocket. United Launch Alliance will replace and test the transmitter and select a new launch date once that work has concluded. Our preview story was originally posted Oct. 4, and updated Oct. 5 and 6 for the earlier weather-related launch delays.

The United States is launching another spy satellite on a secret mission early Saturday (Oct. 7) after a one-day delay, and you can watch the liftoff live.

NROL-52 will be operated by the National Reconnaissance Office (NRO), which manages the country's fleet of spy satellites. NRO missions tend to be classified, so it's unclear what exactly NROL-52 will be doing as it circles Earth.

Thursday's launch comes less than two weeks after ULA's previous NRO launch. On Sept. 24, an Atlas V lofted the NROL-42 satellite to orbit from Vandenberg Air Force Base in California.